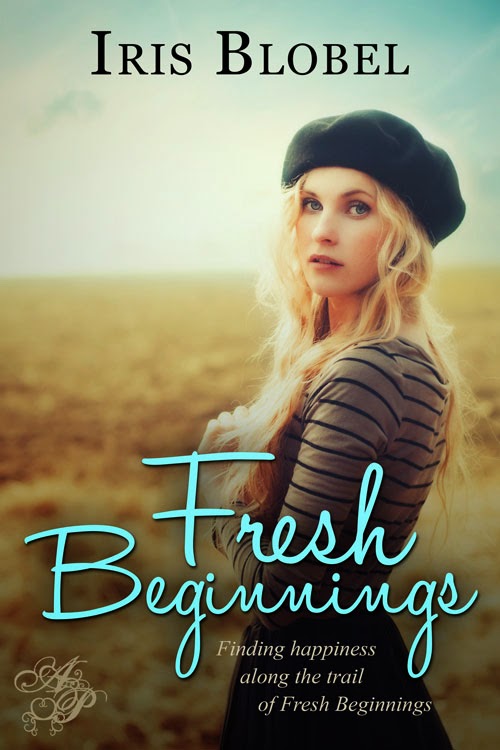 Thank you Ariella for having me on your blog today.

My new book “Fresh Beginnings”, which was released this week, has a very special meaning to me. My husband and I took our two girls to the US last year. We rented a motorhome and travelled through five states in a bit over three weeks. We had the most amazing time, exploring this beautiful country, meeting wonderful people, learning about the US culture, and having a little chuckle at some “differences”.
“Fresh Beginnings”, which is the third in the Beginnings series, takes Jared to the US where he meets Ivy, an American “hitchhiker”. I’d describe the story as “our diary” with a romance written around it.
I hope the readers will love it as much as I do.

Blurb:
The small town of Hobart in Tasmania has witnessed many beginnings in recent years. At yet one more beginning, the wedding of a friend, Jared Fraser decides it’s time for some fresh beginnings to come his way… And he sets out for a holiday to the US to travel along the Route 66 in a motorhome.
Ivy Bennett thought leaving her boyfriend would be the hard part. It doesn’t take long to figure out how wrong she was. As she struggles with making a new start in her life, the last person she expects to lead her to happiness is a laid-back Australian on holiday.
Then the arrival of family friend Mia Levesque and her boyfriend, Josh, turns Jared’s holidays upside-down when he’s forced to play arbitrator between the two teenagers.

Author:
Iris Blobel was born and raised in Germany and only immigrated to Australia in the late 1990s. Having had the travel bug most of her life, Iris spent quite some time living in Scotland, London as well as Canada where she actually had met her future husband. Her love for putting her stories onto paper has only recently emerged, but now her laptop is a constant companion. Iris resides west of Melbourne with her husband and her beautiful two daughters as well as her dog. Next to her job at a private school she also presents a German Program at the local Community Radio.

"G'day!" He stared at her and for some reason something tugged at his heart. Not that he wanted that. He had no room for women, let alone American ones. They all were on earth to make life complicated. Mark was constantly running around for Sophie or Hope, even though Mark's wife was one in a million and little Hope was simply adorable, especially when she was asleep.
"Ya know it's dangerous to hitch a ride," he finally said when she was still quiet.
She stared at him for a moment, but then replied with the typical American twang in her voice. "I know you said something, but I have no idea what."
He chuckled. "It is dangerous to hitchhike," he repeated with exaggerated pronunciation.
The woman stepped a bit closer to the window. "Are you from Austria?"
He laughed aloud.
"Australia, I meant," she added, seemingly embarrassed by the mistake.
"I am indeed." He watched her looking ahead towards the horizon. "So you wanna hitch a ride?"
Jared had a feeling she didn't want to, but her current situation didn't give her many choices. There they were in the middle of nowhere, with the next place a fair few miles away.
"Name's Jared," he said and then he opened the door and walked around the motorhome. Leaning against the vehicle, he looked at her. She was pretty. Thin, but pretty. When her brown eyes met his, he experienced another one of those heart tugs and wasn't impressed at all. He tried to look right past her. It wasn't happening though. They were like magnets.
"Jared," he repeated and held out his hand.
Her look went right past him into the distance, and he assumed she was fighting with herself, part of her wanting to get off the road, the other part being worried.
"Anybody else travelling with you?" she asked quietly.
He shook his head. "Nope."
She closed her eyes, took a deep breath, and, after a brief moment, reached for his hand. "Nice meeting you."
Acknowledging that she wasn't much into sharing details like her name, he opened the door for her. "Where are ya headin'?" he asked.
A smile started in her eyes and played with the corner of her lips. He felt himself smiling back. There was an appreciation in her smile.
"Could you drop me off at the next stop?" she asked hesitantly.
"Most certainly, but where are ya headin?"
She shrugged. "Kingman?"
"Is that on this road?"
Nodding, she said. "Yes, it is. It should be less than a hundred miles along this highway."
"Then hop in."
She turned to get into the motorhome, and he took in her small stature and the narrow shoulders which seemed even smaller in her tight, red T-shirt. Jared noticed her cargoes were just hanging onto her hips. A nice steak wouldn't go astray on these hips. Suddenly she stopped and moved to look at him. "Thank you," she whispered.
"No worries mate."
Jared held her gaze and wasn't sure what to say or do. She simply stood in front of him like frozen.
"My name is Ivy," she said after a long moment.
"Hedera. An evergreen climbing or ground-creeping woody plant in the family Araliaceae."
With a frown, she stared at him. "I really didn't understand that one."
He laughed. "Sorry, mate. I got carried away. I'm a landscaper. Ivy is a climbing plant." Scratching the back of his head, he added, slightly self-conscious, "And, of course, a beautiful name."
There was a small laugh as she stepped into the motorhome. He went around and slid behind the wheel before driving back onto the road. There was a long silence, and Jared wasn't really sure what to do or say. Usually, he was good with silence. Actually, he loved it. But at that moment, the silence made him uncomfortable.
"So, what brings ya out into the middle of the sticks?"
When there was no reply, he turned and looked at her. There was a big frown on her face, and he sighed.
"I thought you all speak English as well?"
"We do," she said with a slight giggle. "But I'm not so sure about you Australians."
With a grin he replied, "Now, don't be cheeky, Ivy."
"Don't bite the hand that feeds you, my mom always said." She laughed. "No way would I make fun of you."
"So, you're expectin' a meal as well?"
There was a moment of silence again, and he glanced over. The smile was gone and panic was written all over her face.
"I… I didn't—"
Quickly he reached out for her hand. "I'm pulling your leg." And when she didn't reply again, he muttered, "This thing with you Americans not understanding English is turning into a problem. I was kiddin'."
"Pulling your leg?" She shook her head. "Never heard of it."


A bark of laughter filled the small space. "Anyway. Talkin' about food. There's a small place ahead. Want some lunch?"
Posted by Ariella Moon at 5:00 AM