The Summer Spotlight on Reading concludes with

At First Sight by Mya O'Malley.

Do you believe in love at first sight? 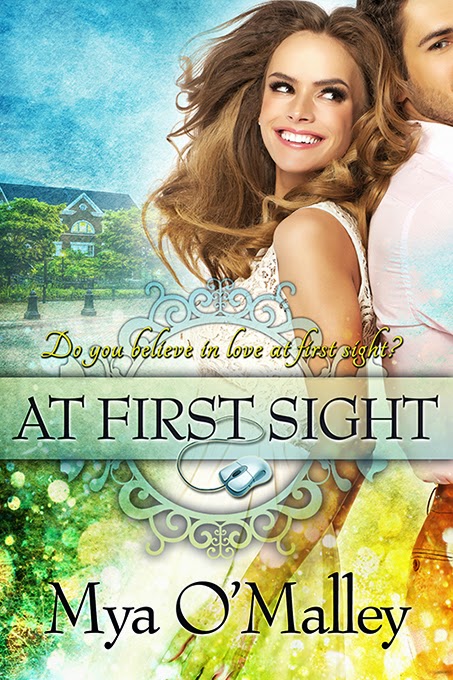 Blurb
Modern love can be a headache.  Just ask Annie Morgan, who, recently divorced, finds herself in the middle of the proverbial online dating jungle.  Making a deal with her best friend, Annie agrees to go out on exactly five online dates out of seventy-six potential suitors.
Shane Nicholls was jaded, he had his heart broken and never got over the hurt. Now, convinced that all women are trouble, he avoids drama at any cost.  Funny thing is, drama seems to find Shane around every corner.
Can Annie, a romantic at heart, find love online or will she find love at first sight the old-fashioned way, by awkward, chance meetings with Shane Nicholls? Through a number of obstacles and heartache, Annie and Shane find that love at first sight really does exist if you truly believe.


Johnny’s was packed. Standing on line to place her order, Annie took in her surroundings. Just as the owner, Johnny, was coming over to take her order, something caught Annie’s eye. The guy near the window, he seemed familiar somehow. Where had she seen him before? He was eating dinner with a pretty brunette. He lifted his head to look at Annie as their eyes locked. On no! It was the guy from the mall, the one she bumped into. She quickly spun around, knocking right into the waitress who was carrying a tray of soft drinks.


Soda soaked her shirt and dripped onto the floor. The waitress was clearly annoyed and appeared like she would have loved to tell Annie off. Instead she rolled her eyes and ran to get a towel. If Annie thought she was embarrassed before, it was nothing compared to how she felt now. Every eye in the place was on her, including the guy from the mall. Helpless to do anything else, she grabbed some napkins and bent down to sop up some of the mess.
“It seems you have a knack for causing a scene everywhere you go.” It was his voice. The voice that filled her head with inappropriate thoughts, with longing. What was she thinking? Did she dare look up? His gaze was a magnet, forcing her to meet his eyes.
His eyes were a warmer brown than she had remembered, drawing her in.
“I...uh...”
“I’m joking. Here, let me help you with that.” He grabbed the napkins from her hand. The heat between them jolted her back. She moved quickly, surprised he could evoke such a reaction from her. Nobody had ever made her feel so exposed before. What was going on here? Annie felt foolish.
“I’m Shane. Shane Nicholls.” He extended his hand to her. They must have appeared to be quite the sight, bending over to clean up the mess while shaking hands.
“Annie.” Annie remembered her new rules of safety in the dating world. One of them was she would not reveal her last name or any other personal information until she was sure the guy wasn’t a stalker or anything.
“Annie. It suits you, I like it.” Annie had almost forgot about the woman waiting for Shane at the table near the window. She glanced over and took in a tight-lipped woman. It hit Annie that this woman was not the same stunning woman from the mall. Hmm, she had met his type before. This guy had “player” written all over him. She quickly brushed herself off and excused herself.
“Hey, Annie. Wait.” He reached for her hand. Annie forgot all about placing her order and made a beeline for the door. She didn’t look back. Well, Annie figured, it looked like it would be Chinese food tonight.
Buy Links Mya O’Malley was born and raised in the suburbs of New York City, where she currently lives with her husband, daughter and three step-daughters.  The family also consists of two boxers; Destiny and Dolce and a  ragdoll cat named Colby.  Mya earned an undergraduate degree in special education and a graduate degree in reading and literacy.   She works as a special education teacher and enjoys making a difference in the lives of her students.


Mya’s passion is writing; she has been creating stories and poetry since she was a child.   Mya spends her free time reading just about anything she can get her hands on.  She is a romantic at heart and loves to create stories with unforgettable characters.   Mya likes to travel; she has visited several Caribbean Islands, Mexico and Costa Rica.   Mya is currently working on her fifth novel.