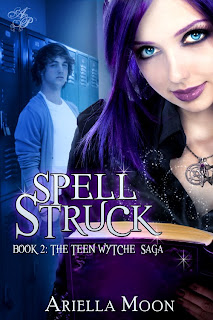 What if the one person who saw through your lies and loved you, harbored a secret that could cost you everything?

Of course my internet crashed on Spell Struck's release day, and the huge wildfire near my home continues to spew ash everywhere. Cars send up billowing clouds of the stuff, like Pig Pen in the old Charlie Brown comics.

Despite these complications, Spell Struck, Book 2: The Teen Wytche Saga, released as planned. Yay! Here's a little bit about it: 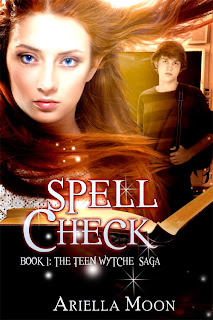 Two girls, One guy, and a Spell Book. What could possibly go wrong?

Spell Check has a fabulous new cover! At Astraea Press and Amazon, the e-book version of is on sale for 99 cents! I'm sure Barnes and Noble will soon follow. The sale is limited. In case you are new to the series, here's a bit about Spell Check:

Ever since Evie’s photojournalist dad died, paralyzing fear prevents her from picking up a camera. If Evie can’t pull it together soon, she’ll lose her position as Yearbook Photo Editor and suffer academic failure. Even worse, Evie will lose Jordan, her secret crush, if she can’t stop her supposed friend, Parvani, from casting a love spell on him. Despite a falling out, Evie never forgot Jordan. Now they are lab partners, and the chemistry between them definitely sparks. Soon the moon will be in the optimum phase for magic. Parvani possesses a brimstone-hissing spell book. To save Jordan, Evie must join forces with Salem, the school Goth. The clock is ticking. Can Evie get her mojo back in time to check this spell?