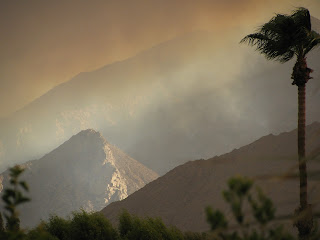 While slogging away at the manuscript for Book 3 in The Teen Wytche Saga, I noticed the sky outside my window had darkened and turned a peculiar shade. Further investigation (Miss Gracie and I opened a nearby sliding glass door and sniffed the air) confirmed the presence of smoke. LOTS of smoke.

Of course, we took a break and turned on the news. 33 mph winds were pushing smoke from a fire near Mountain Center our way. What to do? Miss Gracie still needed her evening walk. The sky continued to darken. We decided to go for it.

Heat radiated up from the sidewalk, even though the newscaster swore the high winds made the temperature feel cooler than it really was - 107 degrees. Miss Gracie refused to walk on the grass, which was much cooler than the sidewalk, but probably took more effort, given her short legs and "low undercarriage." We lasted about 15 minutes, clocking in far below our normal mile and a half.

Hopefully the fire fighters have better stamina. Darkness is falling fast. May they stay safe and wrestle this blaze under control soon.