At What Cost: J. Andersen


During her junior year, sixteen-year-old Maggie Reynolds expected to shop for prom dresses not maternity clothes. Now, instead of studying for the SATs, she’s reading, What to Expect When You’re Expecting. Maggie’s ‘Mother Dearest’ lives in fear that Maggie will somehow taint the family name, so Maggie can’t turn to her for help. Meanwhile, her father is oblivious to anything but his 9-9 job. And her boyfriend, Justin? She’s pretty sure he’ll stay by her side.

While Maggie wrestles with her options, Justin offers a solution: abortion. It would solve all her problems quickly, easily, and effectively. And her parents would never know, which means they won’t throw her out and cut her off like they’d always threatened if she got herself knocked up. But an easy decision becomes difficult when Maggie’s aunt discovers her secret and sets out on a mission to stop the abortion, putting a kink in Maggie’s plan. Now Maggie must decide which choice she can live with: abortion or teenage motherhood. Either way, it’ll be a tough road to travel.
Young Adult RONE finalist award and the USA Best Book Award finalist in Youth Issues

Excerpt
“You’re pregnant?” It was a harsh half statement, half question punctuated with clenched teeth.
“Wha—?” Maggie was too shocked to realize what had happened, but when she looked back to where she stood, she spotted a sheepish looking Lauren mouthing the words, “I’m
sorry.”
“Ugh.”
“Well, are you?” His grip on her tightened.
“Justin, you’re hurting my arm.”
He let go and motioned for her to sit with a quick thrust of his hand toward the table, but his eyes revealed his anger. He was furious, but then she saw a hint of fear hidden behind his golden irises. In those moments, she was five years old again, the day she’d broken her mother’s favorite vase. Her mother had loomed over her, drilling her for information. Pointed and yelled. This time, it was Justin.
“Are you, or aren’t you?” His eyes crinkled, his brow furrowed, and a deep crease appeared on his forehead. Trying to control his reactions proved to be impossible, and soon, his leg bounced under the table, and he wiped the nervous sweat on his palms off on his jeans.
This still wasn’t the place to talk. The cement walls of the school were beginning to feel like a jail cell; anywhere she went, Maggie felt trapped.
“Can we talk about this after school?” Maggie said, trying to be assertive.
His knuckles turned white as he clenched his fists. “No, we can’t. If you’re pregnant, I need to know.”
This wasn’t how she had pictured it. She was supposed to plan the conversation and the place. Definitely not in the corner of the cafeteria with people walking by who might hear her secret, a secret she hadn’t decided how to handle. Thank you so much, Lauren!
Justin grabbed her wrists from across the table. “Maggie, it’s a simple yes or no question. Are. You. Pregnant?”
She could feel the rage rolling off him in waves, and she knew stalling was not an option.
“Yes.”
The silence grew louder, and Justin didn’t move. He stared at her, his eyes shifting across her eyes in a quick staccato. She didn’t know she could feel so uncomfortable, so she tried to ease that discomfort by looking away. When she met his gaze again, he glared at her, not saying a word. He never spoke. Not when he let go of her wrists, not when he got up from the seat across from her, not when he left the room.
Not a single word.


At What Cost is available at 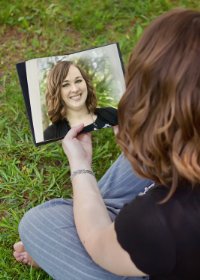 Jessie Andersen lives in a small town in Western New York with her husband and three kids. A former English teacher, she now spends her time writing while the kids are at school and the baby is sleeping. She volunteers at the local library and sings in the church band. You can find information about her books at ”http://jandersenbooks.com
and you can follow her blog at http://Readbetweenthelinesbookclub.blogspot.com
www.facebook.com/jandersenbooks