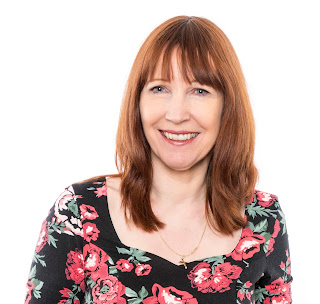 Congratulations, Karen, on your new novel, I Do?…or Do I? Love your cover! I have a few questions...

1. Do you like to plot out in advance, or do you prefer to see where the story takes you?
I work out a basic outline so I know where the story is going and the main conflicts and events. Then I write character profiles so that I know my characters well, what their background is, what makes them tick and their driving emotional force. Then I start writing and see where my characters take me. 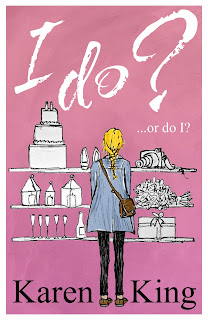 2. Can you see yourself in any of your characters?
I think there's probably bits of me in, Cassie, I like to wear a maxi dress with a denim jacket, like she does in the first chapter, and I always paint my toe nails red. I'm also a bit of a chocoholic!

3. Which character was the most difficult to write, and why?


Jared. He hurt Cassie badly, and is obsessed with his career which makes him a bit selfish and could make it difficult for the readers to warm to him. I wanted the readers to like him and to understand why he'd let Cassie down and to see how much he loves her.

Author Bio
A member of the Romantic Novelists' Association, the Society of Authors and the Society of Women Writers and Journalists, Karen King writes sassy, contemporary romance just right for reading on the beach. 'I DO - or Do I?' is her first chick lit for Accent Press. She has been contracted for two more.
Karen has had two other romance novels, several short stories for women’s magazine and 120 children's books published.
When she isn’t writing, Karen likes travelling, watching the ‘soaps’ and reading. Give her a good book and a box of chocolates and she thinks she’s in Heaven.

Blurb
Local journalist Cassie is getting married to hot-shot lawyer, reliable Timothy, and his mother Sylvia, who Cassie has nicknamed ‘Monster-in-Law’, wants to plan the entire wedding. When Sylvia books the exclusive ID Images to take photographs of the extravagant do, Cassie has no idea what she’s walking into.

The elusive JM, ID Images’ newest photographer, just so happens to be Jared, Cassie’s first love and ex-fiancé, who broke off their engagement to travel and take photos of far-reaching wonders. He’s back to pay for his next wild adventure.

Cassie decides it’s best to pretend not to know him, but when she’s asked to write an article for her newspaper, she’s tasked with a column surrounding all things wedding related. When Cassie jokingly writes a column meant for herself depicting her situation, a co-worker submits it in place of the real article and it’s soon making headlines, with readers asking the age old question - Who Will She Choose?

‘June! That’s only two months away!’ Sam squealed down the phone. ‘You can’t plan a wedding in two months.’
Which is exactly what Cassie had told Timothy when his mother, Sylvia, had suggested it. She could hardly believe she’d let them both talk her in to it.
‘The thing is, Sylvia heard there was a cancellation at Hollington Castle and she booked it for us. It’s a really sought after venue and we’d be mad to turn it down,’ she told Sam.
‘Are those Sylvia’s words or yours?’
‘Sylvia’s,’ Cassie admitted. ‘She’s right, though. We got a good price, too, because of the cancellation. Timothy and I went to look around yesterday and it’s an amazing place. It dates back from the eighteenth century, you know.’
‘You only got engaged on Valentine’s Day,’ Sam pointed out. ‘I thought you weren’t planning on getting married until next year?’
‘We weren’t, but it seemed too good an opportunity to miss. It’s normally booked up at least eighteen months ahead. Especially in the summer.’ She was repeating Timothy’s words to her yesterday when she’d expressed some doubt about arranging the wedding so quickly. ‘You do want to marry me, don’t you, darling?’ he’d said, and when she’d assured him she did he’d pooh-poohed her protest that two months wasn’t long enough to plan a wedding, saying his mother would help, and she’d found herself agreeing. Now it was all arranged, the venue was booked, they were getting married on 26th June – and she was starting to panic. How the hell was she supposed to organise everything in that time? There was her dress, the bridesmaids’ dresses, invitations, flowers, food, reception, favours, wedding cake … she was hyperventilating just thinking about it.
‘Look I know it’s short notice but you will be my maid of honour, won’t you?’
‘Yes, yes, yes!’ She could just see Sam, jumping up and down with excitement. ‘Oh, I was hoping you’d ask me.’
‘Of course I’d ask you, you’re my best friend. Who else would I want?’ Cassie told her. ‘Can you meet me for lunch and I’ll fill you in on all the details? Twelve thirty at Benjo’s? We’ve got an appointment with the photographer this morning so I can tell you all about that, too.’
‘What, already? I’m guessing that’s Sylvia’s doing, too?’
‘Yes, the people who cancelled the wedding had booked I.D. Images so of course they have a cancellation too, and Sylvia knows Daniel, the “D” in I.D., so he’s agreed to hold the slot for us. If we want it.’
Sam whistled. ‘As if you’d turn that down!’ She paused. ‘I thought you were going to the Discover France show today.’
‘I was, but Sylvia booked the appointment and Timothy can’t make it. He’s got to work.’
‘Whereas you just mess around… ’
Cassie sighed. Sylvia never took Cassie’s job as a features writer for the local newspaper seriously. Timothy was a partner in a law firm, whereas Cassie filled in time until she became Timothy’s wife as far as Sylvia was concerned. Sylvia had given up her secretarial job when she married Timothy’s father and devoted her whole life to looking after him, then Amanda and Timothy when they came along. She made it obvious that she expected Cassie to do the same when she married Timothy, even though Cassie had clearly stated that she had no intention of giving up work. ‘Luckily, Owen’s cool about it. He said I can swap my day off.’