Eerie, A Mature YA Paranormal Romance from C. M. McCoy

Enter to win a $10 Amazon/BN GC - a Rafflecopter giveaway

Today's spotlight is on Eerie. Don't you love the cover?
Be sure to scroll down and enter the Amazon or Barnes and Noble Gift Card Giveaway! 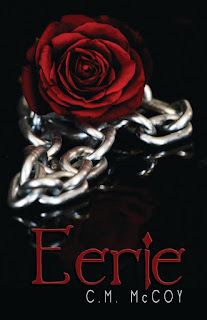 As seen in People Magazine…

Hailey's dreams have always been, well...vivid. As in monsters from her nightmares follow her into her waking life vivid. When her big sister goes missing, eighteen-year-old Hailey finds the only thing keeping her safe from a murderous 3,000-year-old beast is an equally terrifying creature who has fallen "madly" in love with her. Competing to win her affection, the Dream Creature, Asher, lures her to the one place that offers safety--a ParaScience university in Alaska he calls home. There, she studies the science of the supernatural and must learn to live with a roommate from Hell, survive her ParaScience classes, and hope the only creature who can save her from an evil immortal doesn't decide to kill her himself.

Nowhere to Hide
“Judge of your natural character by what you do in your dreams.”
- Ralph Waldo Emerson

Hailey plunked her head on the desk and groaned. Why, why…why couldn’t she just tell Asher that she wanted out, that she was afraid—afraid of the others, afraid of dying, and even afraid of…of him. After all, he was planning to kill her. Only temporarily, but still.

She couldn’t believe she was even considering it, but she had no choice. If Asher didn’t kill her, one of the others would.

And Asher protected her. He cared about her. He loved her, right? Asher—an emotionless creature. Hailey wasn’t sure if he was even capable of love.

Oh, this made absolutely no sense. Kill her to save her? Was that love?
Freshman year at her dream college was turning into nightmare, and as she rolled her forehead on the desk, the library’s impossibly large ceiling clock echoed a thump with her heart. She simply had to pull on her big girl pants and tell Asher she was done.

She squeezed her eyes shut as a swarm of butterflies took flight in her stomach.

Lately, she felt an awful lot like Jekyll and Hyde: logical, rational ParaScience student by day—emotional monstrosity at night. Come to think of it, this was more like The Phantom of the Opera, and she was the naïve student who didn’t realize the secret and strange angel she’d come to know was actually a homicidal maniac…

Hailey jumped up. She didn’t mean to say that out loud.

Asher slid behind her, putting his lips next to her ear. “But I suppose I am homicidal,” he whispered, his breath on her skin sending goose bumps down her arms and legs.

She leaned into him and sighed.

So much for steadfast resolve.

Wrapping his arms around her waist, he pulled her closer.

“How did you know I was here?” she whispered.

“You were dreaming, Hailey,” he murmured. “I’ll always find you when you’re dreaming.” 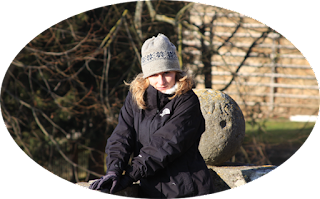 C.M. McCoy is an Irish dancer and former Air Force officer living in the Great White North. Though B.S.'d in Chemical Engineering and German, she’s far happier writing stories involving Alaska and a body bag (with an awkward kiss in the mix.) While working emergency dispatch for Alaska State Troopers, she learned to speak in 10-codes, which she still does...but only to annoy her family.

C.M. McCoy will be awarding a $10 Amazon or Barnes and Noble GC to a randomly drawn winner via rafflecopter during the tour. The more you comment, the better your chance of winning. Other tour stops can be found here.