You know I have a soft spot for dragons (Spell Fire), so how could I pass up the chance to feature
Descended From Dragons by Tricia Owens? Be sure to enter the Giveaway raffle to win a

Descended From Dragons
by Tricia Owens 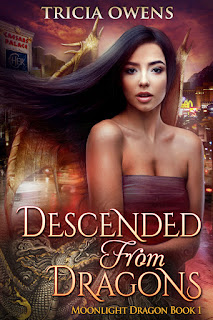 Beneath the glitz and glamour of Las Vegas lies another city. A secret city in plain sight, full of warlocks and demons, shape-shifters and golems. A city that feeds off the chance magick that is generated by gamblers and which is ruled by mysterious beings called the Oddsmakers.

It is in this strange underbelly of the occult that Anne Moody runs a cursed pawn shop for the desperate, the curious, and the magickally inclined. Though the job is boring, it keeps her under the radar. None of her customers have any inkling that she is a dragon sorceress with a power that's been feared throughout history. However dragons are no help when a stone statue ends up in her shop that is more than it appears. The statue is a gargoyle named Vale, who is shrouded in mystery and secrets. When she learns that Vale is possessed, and that the person responsible for cursing him plans to take over Las Vegas with a horde of demons from Hell, Anne realizes it is up to her to defy the Oddsmakers and save the city, and possibly the world.

After silently parting the bead curtain I paused just at the threshold, listening. The shop was spooky enough without the lights on thanks to all the strange silhouettes, but knowing that half the objects were also cursed gave me another reason to shiver as I panned my gaze over the place.

I sent Lucky toward the sound. My dragon flew a loose circle around the left side of the room. That narrowed it down a bit, not that I felt comfortable putting my back to everything that was on the other side of the room. I displayed a few katanas and items that could be used as weapons there, but thankfully none of them were cursed with movement. At least, I hoped not. I guess I'd find out for certain when a spear pierced my back.

A fluttering sound, like the flapping of thick canvas, made me instinctively drop into a crouch. Lucky reared up, ready to attack. But nothing flew overhead. Breathing shallowly, I crawled toward the counter. I'd feel safer behind it and with the wall at my back.

As I rounded the counter, I realized I knew what had had made the noise. The only new thing in my inventory was the gargoyle statue. When I raised my eyes above the countertop, the gargoyle was gone from where it had sat. The cameos were quick to offer their opinions.

"You met the love of your life today…"

"The cursed shall pay, Anne Moody!"

Yep, the damn gargoyle statue had come to life and was flying around Moonlight. Definitely a way to make me remember you, Christian. 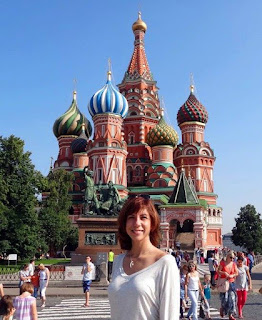 Tricia Owens wants you to know that Las Vegas is actually a pretty cool place and you won't be eaten by a troll there. Probably. A former casino games dealer and cruise ship editor, Tricia has traveled extensively, visiting over 70 countries. She writes full time in several genres including urban fantasy and romance. Her favorite setting is her home town, the city of sin.

Tricia Owens will be awarding a $75 Amazon/BN GC to a randomly drawn winner via rafflecopter during the tour.

If you cannot embed the code, please use this HTML link:

Enter to win a $75 Amazon/BN GC - a Rafflecopter giveaway
Posted by Ariella Moon at 1:00 AM