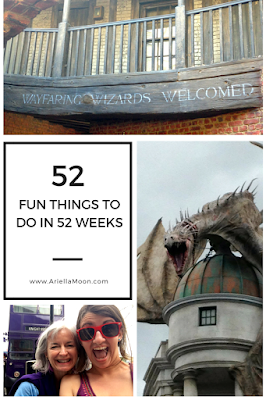 I can’t remember how I got conned into this.
Evie O’Reilly in Spell Check

Did you know dying your hair purple changes your brain waves? I wouldn’t have believed it either, but how else can I explain this sudden urge to crawl out of my writing cave? Could it be Milestone Birthday Madness? Or the fact that I woke up this morning as Evie from The Teen Wytche Saga, when it is Beltane Eve and I am supposed to be revising the sequel to The Beltane Escape?

Has the world gone mad?

Here is my Milestone Birthday Challenge: Find
52 Fun Things To Do In 52 Weeks.

From April 2016 to April 2017 I will zip line out of my comfort zone/writing cave/hermit existence and enjoy, explore, and create fun moments and events. You can follow my progress here, and check out the more magical fun things on my Shaman Blog.

A Harry Potter World just opened in California, but the Wizarding World of Harry Potter™, Universal Studios, in Orlando is twice the size. More importantly, Orlando has Harry Potter and the Escape From Gringotts™. We went on the ride twice. Does that count as two fun things?

What I Loved:
My daughter grew up on the Harry Potter books, and I loved that this trip celebrated our shared love of J.K. Rowling’s brilliant world building.

It was also heartening to see so many children and teens at the park embodying characters from the books. Many dressed in Hogwarts school uniforms and had a stuffed dragon or owl on their shoulders. And the wands…

When was the last time you saw children with sticks in their hands, and no one pretended they were weapons? The wands from Ollivander’s Wand Shop came with a map of places where, if a person waved their wand just right, magic happened. Items in a shop window moved, or rain fell from an umbrella. Brilliant! 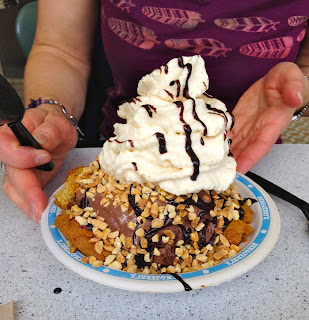 Tips For If You Go:
Express passes can’t be used on the major Harry Potter rides. But lines are long all over Universal Studios, so the passes are still worth the cost, especially if you are traveling with younger children who may not have the patience or stamina for long lines.

If possible, get a pass that allows you early admission to the park. Once in, sprint for Diagon Alley™ and the Gringotts ride.

Several rides require you to store your purses, backpacks, water bottles, etc. in free lockers. Access to the lockers and to gain admission to the park, requires a fingerprint. Thousands of fingers touch these machines every day. Germ city! Wash your hands frequently to avoid getting sick.


Fun Thing #2
This one is magical, mystical, and free. Read about it on my Shaman Blog.