Series writer J. F. Jenkins is my guest today, writing about one of my favorite subjects... dragons!  Welcome, J.F.!

WHY DRAGONS, AND THE EVOLUTION OF THE SERIES:

I'm not sure why I picked dragons. Probably because at the time I was so tired of people only focusing on werewolves and vampires and not thinking outside of the box. Dragons have always been a fascinating species to everyone, and it seemed plausible and fun for me to take them and reinvent them into something completely new.


The series started as just one book. One, big, monster sized book. As I started to go through editing and rewriting, I discovered that 1) the book was getting too long for the publishing requirements of the press, and 2) There was a lot of new content being added in. Five books (and counting) and a short story collection later, and a saga is born. 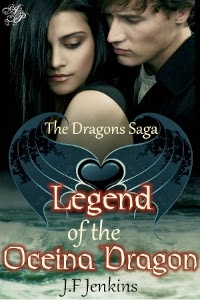 Darien Oceina is the youngest son of the Great Dragon Lord of the Water. For years he's loved and cherished Tai Dawson from afar. Tai is a simple, ordinary girl who doesn't even know Darien exists. On his eighteenth birthday, he chooses her as his wife. But there’s one problem: She thinks his choice means she's going to be offered as a sacrifice to the Dragon Lord, but instead, she’s forced to move to his home, far away, to give up her life and be his bride.

When she first sees Darien after the ceremony, she doesn’t expect to feel anything but hatred toward him. The two are struggling with the complications of a new marriage when their nation is attacked by a rival dragon species. Together they learn to love one another while they struggle to stay one step ahead in a game where the prize is their survival.


EXCERPT:
The Oceina dragons all had long, well muscled, snake like
bodies and four legs to support themselves with on the ground.
Their scales were always a shade of blue. More often than not a
deep, rich, dark, blue that shimmered in the light like precious
stones. They were elegant and strong, quick to anger and wise, and
thus amongst the most highly revered species of dragon in the
world.

Without the blessing of the great dragon lord of the water,
the island would lose its protection and be outcast as a rebel nation,
or one unaffiliated with one of the four great dragon lords. The
island was too small, and far too passive to risk such a venture.
Often, this resulted in the priests being too agreeable, unwilling to
assert their true opinion. The dragon lord had been told they would
be by his kin, but he was amazed at how annoying this was.
Generally, he was very patient, but the priests he had spoken to
today were beginning to wear him thin.

“You don’t like her?” The high priest stammered. “Forgive
my doubt, my lord, but what is there not to like about her? Surely
she cannot be that displeasing?”

“I don’t like her,” he repeated. “I have another in mind. Now of
course if you wish to go against my wishes and not provide for me the
sacrifice of my choice, I will simply kill them both and leave your temple
for the Inero to set ablaze. There should be as little bloodshed as possible.”

“I am pleased we agree. Now, as for my chosen sacrifice….”

Her name was Tai Dawson, and in the great dragon lord’s
eyes, she was by far the most beautiful human female he had ever
seen. Few would argue with him on the matter, and not simply
because he was the lord, but because she was indeed a rare beauty.
She radiated with purity, and not just in the sense that she had
never known the touch of a man, but rather because she had the
same sort of beauty a waterfall or a sunset had. She was natural
and confident. Her hair was long and dark, and it looked so soft.
The dragon lord wanted to touch it, so badly, but he would have to
wait until the sacrifice.