Set to Love: A Volleyball Romance from Jennifer Rae Gravely

As the shortest girl in my class, I was a disaster at volleyball. Not so for author and volleyball coach, Jennifer Rae Gravely. Set to Love is her new volleyball romance from Astraea Press. Welcome Jennifer, and Happy Birthday! 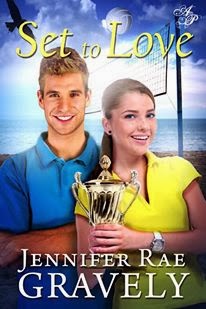 The championship is her dearest desire, not love. Recently appointed girls’ volleyball coach at Keowee High School, Randi Sly spends the night with rival coach Blake Steele after getting sick from drinking too much wine. Rumors swirl as the two battle for the State crown.

Be confident: The game of volleyball is not only physical but also psychological.

Directly in his path, he spotted Randi Sly fumbling in her purse, not paying attention to the curb in front of her. “Randi,” he called. “Watch out!” He lunged forward, catching her as she stumbled. For a brief moment as she filled his arms, he thought of Jenna.

“What are you doing?” she squealed, pulling away. “If you hadn’t called my name, I wouldn’t have tripped.” Randi narrowed her eyes as she ran her hands down her thighs, straightening the clingy cloth that outlined the shapeliness of her long legs.

“No, if I hadn’t called your name and caught you, you would’ve broken your ankle. Some thanks for a noble deed done.”

“I’m not a damsel you have to save.” She brushed her long, shiny brown hair from her shoulders. Even in high heels, she had to look up at him. Blake liked tall woman best and appreciated an athletic but shapely build. Randi obviously worked out on a regular basis, and she was every bit as tall as Jenna.

Blake laughed aloud as he mentally pushed the thought of Jenna out of his head. He needed to quit comparing everyone to her. “You’re one of those.”

“What does that mean?” She squared her shoulders, showing with her body language a complete dislike of him. No doubt she didn’t care for him calling her team out at the meeting. Her eyes blazed like a blue flame in the growing darkness of the night.

“Independent female, the kind that’s a bit self-righteous.” Blake liked a feisty girl. That’s what drew him to Jenna last year when she moved to the area.

Randi huffed, as he knew she would. He liked to play the game, but this one he suspected was pretty good at her job or else she wouldn’t have landed such a prestigious position. Keowee was a county and region rival of his school Saluda, the two volleyball powerhouses splitting the last decade’s state championships. He needed to gain an edge.

Born in Ohio but raised in Pickens, SC, I graduated from Converse College with a triple major in history, politics, and English before earning my master’s degree in education. Returning to my high school alma mater to teach English and to coach volleyball, my teams won four state championships and six upper state titles in ten years. I live with my husband, daughter, seven beagles, and one cat. Set to Love is the second romance published by Astraea Press featuring the fictional Southern town of Keowee.