Today the spotlight is on Three Tiers For Win by South African author, Kathy Bosman. 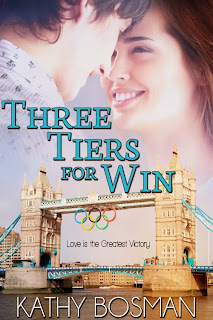 Blurb for Three Tiers for Win

Three Tiers for Win is a story of adventure, romance, and family passion that unfolds with the backdrop of the 2012 London Olympics. Elaine said she would never date an athlete as they’re too driven. That’s until she meets kind, yet intensely focused and ambitious South African Olympic swimmer, Winston Harper. He stands for everything she’d chosen not to go for. Win also has a bad family history which keeps him from opening his heart to her. When intense attraction and affection breaks through some of their barriers, family secrets and conflicts pull them apart again. Only Elaine’s support and Win’s brokenness can draw them back together, but will that be strong enough to wipe away the past?

Her hands shook as she spooned the mixture back into the food processor and he came closer to peer into the bowl. Electricity seemed to ooze out of his pores instead of sweat. She had a strong desire to rub the raised hairs on her arms.
“What are you doing?” he asked.
“I’ll mix the baking powder into a paste and add it in.” Wish he would go away so I can do this in peace.
“Good idea.”
“Aren’t the guys missing you?” she asked.
“Trying to get rid of me?”
Her cheeks throbbed, and she steadied the dish she was holding with all the willpower left inside of her.
“I’ll only go if you let me make myself some coffee. The other guys are drinking sports and fruit drinks. I feel like coffee.”
She laughed. “Are you eating right for your training?”
“Not really.”
“Okay.” She couldn’t help smiling. This guy was becoming more and more appealing with each minute.
“Ooh, there’s biltong.”
“It’s Mick’s. But I have some chocolate if you’re in the mood for being naughty.” Why did she say that? Now her face must be as red as a tomato because of the thoughts running through her head.
“Do you think he’ll mind if I grab some?”
She considered offering to buy Mick some more. The poor guy was starved. “What exactly did my brother buy for you all tonight?”
“Chicken salad.” The face he pulled forced a strange squeaky giggle out of her. She would have given her usual trill laugh if she didn’t feel so embarrassed and overwhelmed with strange feelings for the guy.
“I wish I had something else to offer you.”
“Come out to dinner with me. Then I can order a man-sized steak.”
Flustered was not a strong enough word for Elaine at that moment. She could swear the temperature in the kitchen was as hot as the oven and that the room was about to explode. “I have to bake a cake.”
“That can wait, can’t it? Tomorrow’s another day. If you want, I’ll help you with it.”
The guy was probably aiming to get into the Olympics team. They had two months left before the trials. He couldn’t be serious about giving up a training day to help some silly girl bake a wedding cake? That idea didn’t match the solid, oozing-with-masculinity man with piercing steel blue eyes, standing a mere two feet from her. She must be dreaming. Maybe she’d fallen asleep next to Peggy on the sofa, and she would wake up to find this all a crazy dream.
“I think a cup of coffee will have to do then.” He turned around and pushed the kettle button on. She hadn’t said ‘no,’ and now he was giving up. Her heart plummeted to zero in two seconds. She’d just missed the opportunity of her life to go on a date with the hunkiest piece of male on the planet.
What was she thinking? Of course it wasn’t a good idea. She wasn’t setting herself up for disappointment going with someone smooth and driven like him who would hurt her as soon as the athletic or model type woman came along. 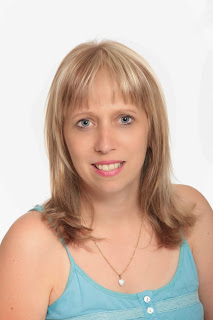 Kathy loves reading and writing even more. She homeschools her three children, one a teenager, so in between unsuccessfully explaining the difference between subject and predicate or how to divide fractions, she enters an imaginary world of troubled and passionate characters whose stories take over the page. Kathy lives in Kwazulu Natal, South Africa, where the summers are hot, the winters cool, and bugs thrive. Her first published novel, Wedding Gown Girl, came out in 2012 with Astraea Press. She belongs to the Romance Writers of South Africa Group (ROSA) which has been her greatest support and inspiration the last few years.