Ticking Clocks
In my first novel, Spell Check, Halloween and the approaching full moon provide ticking clocks for Evie O’Reilly as she races to stop a wrongful love spell from being cast on her secret crush, Jordan.

Ticking clocks add tension, which is why they appear so often in movies and books. The stakes have to be high. Failure to beat the ticking clock must result in terrible consequences. The earth will end. A Head of State will die. The coach will turn back into a pumpkin.

At its core, a Ticking Clock plot looks like this:

Example:
Harry Potter must find and destroy all of the horcruxes before Voldemort grows stronger, or evil will triumph.

To up the stakes and increase tension, the writer must layer in an emotional component that makes the goal both personal and universal.

Harry Potter must stop Voldemort, the man who murdered Harry’s parents, before Voldemort grows stronger, or Voldemort and his minions will destroy everyone and everything Harry loves.

The ticking clock doesn’t have to have worldwide repercussions. But it must threaten devastation to the hero or heroine’s world. Life won’t end if Evie can’t stop the wrongful love spell. But her world will end. She will lose Jordan, who has been her friend since they were preschoolers. Jordan’s world will end. He will lose his free will and be bonded to a girl he doesn’t love, possibly for eternity.

To add another emotional layer to Spell Check, the girl Evie must stop from casting the wrongful love spell is Parvani, Evie’s best friend. Adding to that betrayal, Halloween will mark the second anniversary of Evie’s father’s death. As the date approaches and Parvani remains insistent about casting the spell, the already grieving Evie faces betrayal and lost friendships. Halloween looms, along with the optimum phase of the moon for spell casting. Can Evie beat the ticking clock?

Consider your favorite book or movie. Did it contain a ticking clock? 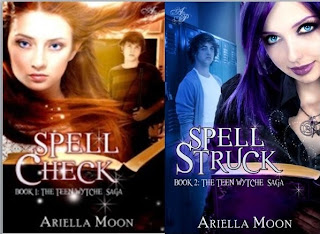