I flew out of Palm Springs International Airport last Friday, the same day Mr. Obama arrived. Bleary-eyed and running late for my early morning flight, my mood brightened when I hit the lengthy security line. Yes, you read that correctly. Polls list Palm Springs International as one of the friendliest airports in the nation. But that Friday morning, TSA amped it up. They must have added pixie dust to their wash loads, because their blue uniforms seemed brighter. Their skin glowed. Even the male agents looked like they had just had facials. They warmly greeted each passenger.

A wall had been added to the already cramped security area, but excited TSA agents kept the line moving. I relaxed, realizing I would make my slighty-delayed flight to San Francisco. I had a busy week-end lined up. On Friday, a friend undergoing radiation for cancer had requested a healing. (I'm a Reiki Master, shaman, and writer.) I also had to track down a waterproof jacket to wear on my research trip to Wales. Saturday I was scheduled to speak at the San Francisco Area Romance Writers of America meeting, on a panel that included authors Kristin Miller and Tina Folsom. Afterward, I had a memorial to attend.

I heard President Obama had a pretty full schedule, too.

While Mr. Obama and China's president, Xi Jinping sweltered in the desert heat, I basked in the cool Berkeley breeze. Yes, Concord was a tad warm, but 100 degrees? Please! It was 118 degrees in the desert the day before I left. Still, it was odd trying on warm waterproof jackets over my sleeveless top and capris at Any Mountain.

As word spread that I was in the Bay Area, I started getting calls from friends and clients. "Do you have time to give me a reading?" "Can we meet?" My former boss, Dr. Tara Levy, said someone who wanted a house clearing/blessing had contacted her just that morning about me. I began to ask myself why I hadn't arranged for a longer trip.

I'm sure Mr. Obama was likewise in demand.

On Sunday, the fabulous jewelry designer, Marhya Harkins (Wytche Krafts), and wonderful healer Anne-Marie Parker, drove me to SFO after our breakfast with LaScentsationals CEO, Lisa Gillett. I paused outside the terminal to glory in the 65 degree air before heading inside.

After yet another flight delay, I boarded a plane for Palm Springs. Meanwhile, back in the dessert, crowds lined the streets and gathered outside Atlantic Aviation to wave good bye to President Obama.
No crowds for me. Not even Miss Gracie. The flight delay had cost me the chance to liberate her from boarding.

I bet Bo was waiting for Mr. Obama, back in Washington.
~Ariella Moon 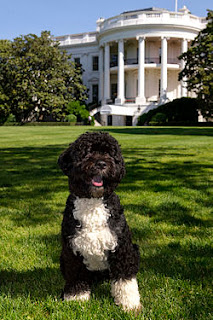