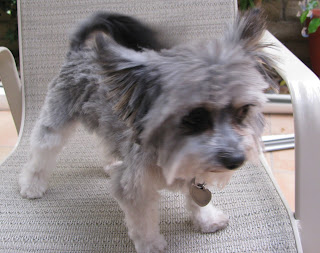 Miss Gracie and I experienced an Unfortunate Event yesterday when a very large and aggressive dog tore across the cul-de-sac and charged us. The dog's elderly owner had lost her grip on the dog's leash. (Powerful dogs should NEVER be on an expandable leash - you lose the leverage needed to control them.) One thing I learned from sitting on a jury in a pit bull attack case is, if safely possible, release your dog's leash if it is under attack. This allows your dog a fighting chance to escape. (Not recommended if attacked near a high traffic area because your dog might run into the street and be hit by a car.)

Initially, the muscular dog, Rio, chased Gracie in a circle around me. His leash acted as a bola (a weighted cord used historically by many cultures to bring down running cattle or game). A hairdresser I once knew fell and broke her arm and hip when this had happened to her. So I sat down before my feet were pulled out beneath me. As I worked to free my legs, Rio chased Gracie with such strength, he dragged me several feet across my driveway before I managed to free myself. The entire time, the elderly woman remained silently behind her car, not even calling to her dog to stop. Perhaps she was mute with shock.

Fortunately, Miss Gracie wasn't physically harmed. But she was afraid to leave the house for many hours. I could tell by her cries during the night that she relived the ordeal in her dreams. I am thankful my denim Capris protected me while I was dragged. I ended up with a noose-like burn and cuts on my ankle. All in all, I'd say we were pretty lucky.

Rio is supposed to be sent off for obedience training. Meanwhile, Miss Gracie and I shall proceed with caution. 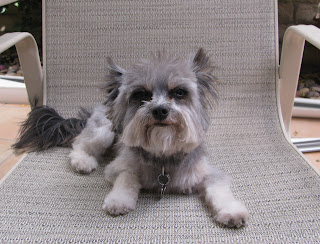