Gwen Hernandez on Write or Die

Over at RWA-University, Gwen Hernandez wrote about the most diabolical-sounding software program for writers:
"In Write or Die, you enter your word count goal and time goal and click Write. Once you start typing, you have to keep typing or there are consequences. You set the grace period and the consequences, which can be a pop-up box with a gentle reminder, an annoying noise that won’t quit until you start typing again, or—for the truly brave at heart—having your work begin to unwrite itself if you stop." 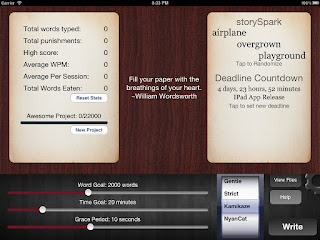 This sounds absolutely terrifying to me-at least the last part. But adrenaline junkies on deadline might find it to be just the kick they need. It sounds like something Stephen King might invent!

If anyone out there has used it, please leave a comment and let me know what happened. Meanwhile, I have my own writing alarm clocks.

I try to write for at least 45 minutes before:
1. lunch, dinner, or the consumption of sugary treats. (I walk Miss Gracie for a a mile before breakfast, so I would get very grouchy if I had to add writing too.)

3. television. Miss Gracie will climb into the "TV chair" at eight o'clock and transmit anxious vibes until I finish writing a scene. Thank goodness for DVRs. Too bad dogs do not understand the concept of shows going on hiatus.

I better go finish the Joshua Tree scene between Thor and Ainslie. I've passed the 40,000 words marker for their story, which I hope will be a Christmas 2013 release. It stars a different cast of characters than Spell Check and Spell Struck. But, as always, the story will be about magic, friendship, and love.
~Ariella
Posted by Ariella Moon at 1:54 PM