A Question of Boundaries: A Realm Hopping Paranormal Romance

I love alternate history novels, don't you?
I'm adding to my To Be Read list
Sandy Bruney's paranormal fantasy romance, A Question of Boundaries 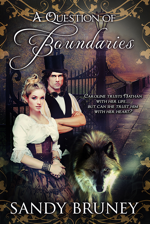 Caroline trusts Nathan with her life…but can she trust him with her heart?

By 1895, the United States is in the 80th year of the isolation imposed by King Thomas I and upheld by his successors. But, some are chafing under the shortages and restrictions, and when inventor Dr. Featherstone declares he has found a way to override all borders, there are those who applaud the discovery and those who fear it.
When Dr. Featherstone fails to return home for an important scientific gathering, his daughter Caroline enlists the help of the Member of Parliament from Charlotte, Nathan Llewellen. As the two search for the kidnappers, Caroline is plunged into a world where travel to other realities is possible in the blink of an eye, and people can assume the forms.

Excerpt
Not wasting time in thought, Caroline gathered her skirts in her fists and ran. There was an alley not five feet from her and she slipped between the two buildings and scurried down it, ignoring the filth underfoot. She heard angry cries behind her and ducked into a side alley between two of the buildings. These, she could see now, were in a state of disrepair that suggested they had been abandoned years ago. Windows were broken and left gaping, doors hung aslant from their hinges. She paused a moment to catch her breath before continuing down the smaller alley, in reality a path not wide enough for two people to  pass each other. The dank smell made her gag and she covered her nose with one hand, the other still holding her hem out of the mud. She held back a scream as a rat ran over her shoe and into a hole in the crumbling brickwork.
The pathway ended without warning and she was in a side street. There were no street lights and the shadows cast by the buildings shifted and eddied as though the bricks and stones were alive. There were no people, either, for this was a section of the city not many visited unless they were hiding from someone or something. She wondered if she was meant to be a prisoner in one of the derelict buildings. No one would think to look for her there.
Hearing voices again, she knew she had not escaped. She cast a frantic glance around her and saw an opening: another alley. Not quite sanctuary, but close enough. She ran as fast as her shaking legs would carry her, coming to a halt by an iron gate. She attempted to open it, but the rough metal gouged her fingers, drawing blood. Whirling, she looked back. It would be a matter of seconds before her pursuers guessed where she had gone. She was trapped unless the alley was so dark they could not see her and would go on by.
A hand closed around her mouth as someone grasped her arm. “Hush. Be still.”
For a moment her mind reeled in denial. How had they come up behind her so quickly? Then she caught a tantalizing, familiar scent: a faint masculine odor mixed with the clean smell of pine-scented soap.
Nathan.
Seeing she recognized him, Nathan removed his hand. He didn’t have to tell her to be quiet. The light at the end of the alleyway was blocked by the silhouettes of two men.
She raised her brows in inquiry. Had they been seen? Her unspoken question was answered as the men began to walk forward.
“Got to be in here. Nowhere else she could go,” she heard in the broad accent of the man who had first tried to kidnap her in the lobby of the Capitol building. She held up four fingers to tell Nathan how many were searching for them.
Leaning his head down so his lips touched her ear, he whispered, “Caroline, do you trust me?”
She nodded, not daring answer aloud. Their pursuers were halfway to them and would spot them in seconds.
Nathan took her hand in his. “Hold tight,” he said.
And then everything disappeared. 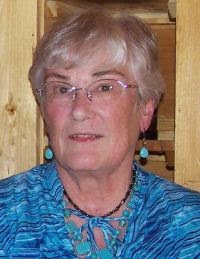 Sandy Bruney is a writer living in North Carolina with her husband and a rescue calico cat. She is the author of several works of women’s fiction, but broke away from that genre with the paranormal romance, A Question of Boundaries “because it was so much fun to write.” She has also written a non-fiction book recounting her journey with cancer, and co-wrote a psychological thriller with a former newspaper co-worker.

A Question of Boundaries will be followed by A Question of Loyalty in 2015, also from Astrea Press. Find out more about her books at Amazon’s Author Page.