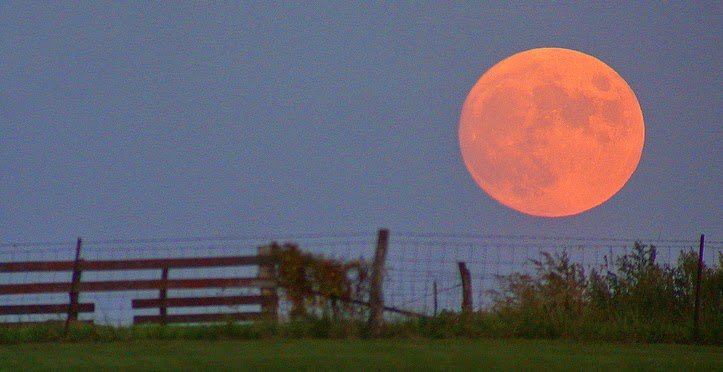 Harvest Moon is the traditional name for the full moon closest to the autumnal equinox (September 22). Like the Hunter’s Moon next month, the Harvest Moon is unusual in that it rises early in the sky at nearly the same time for several successive nights. Tonight’s moonrise happens seventeen minutes before sunset. The consistent early light aids in bringing in the harvest. When the full moon closest to the autumnal equinox occurs in October, then the September full moon is called the Full Corn Moon.

Tonight’s Harvest Moon will be the last “Supermoon” of the summer. A Supermoon is a full moon that coincides with lunar perigee, when the moon’s orbit brings it closest to earth. The moon will appear at its largest just after sunset.

With the Harvest Moon in Pisces, a mutable water sign, expect heightened feelings, intuition, and imagination. The motto for Pisces is “I Believe.”

Harvest Moon Altar and Meditation
Adorn your altar with fiery colors, and apples, grapes, corn, or other produce from local harvests. Light a candle in honor of the Sun God, whose power begins to wane at the equinox. Express gratitude for the abundance in your life. Reflect upon what you have sown over the past few months, and what you have reaped. If you wish to make new goals or buttress existing goals, tap into this month’s heightened creativity. Make a vision board or a fresh goal’s list. Place your creation where you will see it every day.

Mabon
This pagan festival occurs on the autumnal equinox, September 22. To learn about the three meanings of Mabon, please visit: http://www.ariellamoon.com/moonsmagicandmore.html