Heather Gray is back with Redemption

Bestselling Author
Heather Gray is a frequent and always welcome guest.
In March, I featured her Ladies of Larkspur Series.
Today's spotlight is on her newest book: 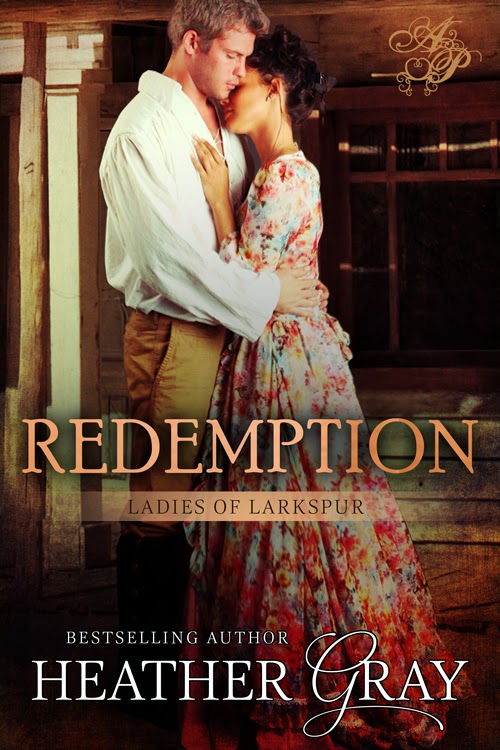 Minnie's impulsiveness has been getting her into trouble her whole life.  She never expected it to land her on a suspect list for murder, though.  With nothing left but a few trunks of possessions and her own defeat, Minnie leaves San Francisco behind and returns home.  In an effort to protect her family and friends, she keeps them in the dark about the ongoing investigation and the possibility that danger may have followed her to Larkspur.  When events force her to trust someone with her secrets, she turns to the sheriff and finds both a friend and an ally.

It may have been four years since he last saw Minnie, but how could he ever forget her?  When Art finds her sneaking through a back alley in town, he knows something's wrong.  The once vivacious Minnie is a mere shadow of her former self, all sparkle gone from her eyes. Art knows that time spent with her will be dangerous to his heart, but he can't turn Minnie away.  Even if it means protecting her from her own impetuous decisions, he vows to keep her safe.

In her attempt to take responsibility for her own choices, Minnie shut out her friends, family, and God.  An unsolved murder isn't all that's chasing Minnie, though.  Will she find her way back to the heart of her faith before it's too late?

Excerpt:
August 1882
Minnie needed to get home quickly. It was imperative. William would be displeased if she was away too long. He was not kind when angry.
She rushed around the corner only to be stopped by the familiar sight of police gathered outside the tenement building where she and William rented a room. Given the area they lived in, seeing police was a matter of course. The sheer number of officers present, though, was anything but routine.
At the time she’d married him, Minnie had expected to have a grand life with her husband. She was but the daughter of a small-town mayor, but William, why he was a gifted and recognized journalist. Her dreams of that happy life of travel, investigation, and collaboration had evaporated within their first month of marriage. The wonderful man who had courted her, caressed her with silver-tongued words, and danced into her heart had disappeared.
He'd left in his place a man who was bitter and angry because she, while the daughter of a politician, had no wealth to her name, no grand dowry to finance the illicit habits he had kept from her during their brief courtship. She'd had to adjust to a life far removed from her dreams, a life where the only thing more common than police at their building was the stench of squalor in the air.
Minnie hurried through the gathering of policemen and rushed up the stairs, hoping that William would still be asleep and wouldn't realize she'd been out. As she approached their room, she saw an officer standing in the hallway by the already-open door to the small space she shared with her husband. "Pardon me, ma'am," the officer said, "are you Mrs. Drake?"
Nodding, she craned her neck to see around the officer. He tried to block her view, but she caught a peek inside. A strangled gasp escaped her lips. With strength out of place in her small frame, she shoved past the policeman and dashed into their quarters. Her husband of not quite three years, William Drake, lay in a pool of blood, almost unrecognizable. His corpse lay there beaten – nay, bludgeoned – to death. His lifeless eyes stared off into the distance. "W-what happened?" she asked, her voice hoarse.
"Mrs. Drake." The man speaking wore his somber expression as comfortably as he wore his suit – both were threadbare from too much use. "I need to ask where you've been these past two hours."
Trying desperately to pull her eyes away from her husband's corpse, she fought to speak. "An errand." The words felt as if they were being pulled from her throat. "I had an errand to run."
"Where, Mrs. Drake?"
About a year into their marriage, William had stopped pursuing his journalism career. He was always either deep in his cups or giving up their every possession at the gaming tables. Going to work had become necessary, but she wasn't sure how she felt about exposing that part of her life to the man in the suit, a virtual stranger. It had been easy enough to step into Will's shoes and take over his position at the newspaper. She did her writing in secret, and everything was published under the name Will Drake, the byline her husband had used.
Minnie didn't know how to explain her job to these men without feeling the shame and embarrassment of having to admit both facts – that her husband was a sluggard who'd forced his wife to support him and that most of San Francisco believed her to be a man. Little encouragement was to be found in the stern faces of the officers, and she began to question whether either claim would be believable.
Looking into the eyes of the suited man, she saw something dreadful. Minnie lifted her hand to her throat in foreboding. "You suspect me, then, in my husband's death." It wasn't a question. She could see the truth of it on the detective's face.
"Answer the question, Mrs. Drake. Where have you been?"
"Everywhere but where I should have been, it would seem," she said softly.

Author Bio:
Heather Gray is the author of the Ladies of Larkspur inspirational western romance series, including Mail Order Man, Just Dessert, and Redemption.  Other titles include Ten Million Reasons, His Saving Grace, and Nowhere for Christmas – everything from Regency England to modern-day America.  Aside from a long-standing love affair with coffee, Heather’s greatest joys are her relationships with her Savior and family.  She decided years ago that she'd rather laugh than yell.  This theme is prevalent in her writing where, through the highs and lows of life, her characters find a way to love God, embrace each day, and laugh out loud right along with her.