In years past, Julian Fellowes, writer and creator of Downton Abbey, has stunned viewers by killing off beloved characters. (Thankfully, nowhere near the body count found in HBO’s Game of Thrones.) Spoiler Alert! In the Season Four opener, Fellowes delivers another shock only this time it is the rape of a beloved character. 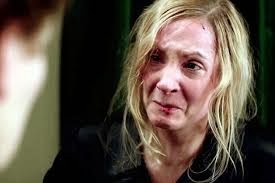 Over the course of three television seasons, viewers have come to know the large cast of aristocrats and servants that make up Downton Abbey. Arguably, the most relatable character, the one with the biggest heart, is Anna May Bates, played winningly by Joanne Froggatt. Viewers became invested in her happiness. They hoped she and Mr. Bates (Brendan Coyle) would overcome seemingly insurmountable odds and be able to marry. Anna’s happiness finally seemed assured, and then the horrid violent act occurs.

Writers are instructed to raise the stakes, build tension. Fellowes accomplished this by:
1.     Building viewer empathy.
2.     Heightening the sense of danger through foreshadowing. Mr. Bates warns Anna he doesn’t like or trust Lord Gillingham’s valet, Mr. Green (Nigel Harman), who later rapes her. Personally, I had some discomfort with this. It could be construed that the rape could have been avoided if Anna had just listened to her husband —thus insinuating the victim is to blame.
3.     Raising the viewer’s sense of helplessness. By juxtaposing scenes of an opera performance upstairs to the struggle downstairs, the viewer becomes increasingly nervous and realizes no one will hear Anna’s screams and come to her rescue.

A Character’s Greatest Strength Can Also Be Her Greatest Flaw
Anna’s greatest strength is her unwavering ability to see the best in people. But the very characteristic that makes us like her so much also endangered her. Someone with a more suspicious nature might have reached for a knife when confronted in the kitchen. In Fellowes’s scene, Anna is slugged and falls to the floor in the second she realizes she is in harms way.

Was the scene gratuitous? Whether writing a book or television series, an author must consider a character’s arc within each book/episode as well as over the entire series. Writer risks reader/viewer alienation if a beloved character is pointlessly harmed. When Season Four debuted in the United Kingdom, Julian Fellowes told The BBC, “The whole point of the way we do things on Downton is we don’t do them gratuitously. We are interested in exploring the resultant emotions and the effect these things have on people.”

Time will tell. Meanwhile, Fellowes has given us a Master’s Class in Character Development. For that, I will forgive him for the unforgettable shot of the long empty hallway in Downtown Abbey and the sound of Anna’s screams.