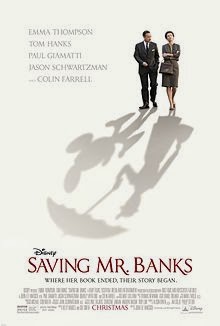 A hero or heroine’s strength or brilliance can be measured by the quality of their opponents. Would Sherlock Holmes seem so brilliant if he were up against a common thief instead of a criminal mastermind? Would Harry Potter be just another child wizard if Voldemort didn’t symbolize supreme evil?

From the outset, Mrs. Travers is prickly and oppositional. Walt Disney is affable and determined. Travers blocks his every move to transform her book into a fluffy, animated musical. The author appears destined to become a cartoon foil to the more loveable Disney. The great surprise in Saving Mr. Banks is the use of backstory to slowly shift the viewer’s perception of the contentious Mrs. Travers.

The Merriam-Webster Dictionary defines “backstory” as “a story that tells what led up to the main story or plot (as of a film).” Unforgettable characters have compelling backstories that drive their current goals. Walt Disney had promised his children he would make Mary Poppins into a movie. Late in the film we discover details about Disney’s father that provide further understanding of his motivation. But it is Travers’s Australian backstory —and what it reveals about her father and her relationship with him — that profoundly changes our understanding of her.

As Mrs. Travers’s backstory unfolds, Marcel and Smith slowly build her emotional foundation. The shapeshifter archetype comes to the fore. Spoiler Alert! Travers’s father shapeshifts from an imaginative, playful, doting father to a drunk who is unable to hold a job or grow up. As our perception of him changes, so does our empathy for, and our understanding of, his daughter.

On another level, the shapshifter archetype brings fresh comprehension to Travers’s assumptions about Disney. In The Writer’s Journey, Christopher Vogler states, “By nature we look for people who match our internal image of the opposite sex.” Subconsciously, Travers judges Disney’s whimsical, magical (pixie dust!) side through the filter of her past and projects her father onto him. She wants to save her beloved characters from Disney because she fears he is too much like her father. But a character’s greatest weakness can be his greatest strength. Without the destructive influence of alcoholism that killed Travers’s father, Disney transformed imagination, magic, and childhood wonder into a highly successive business.

Travers’s emotional journey from distrust to trust, from disempowerment to empowerment, makes her an unforgettable character.