Karen King's new YA novel, Perfect Summer, sounds intriguing and timely. I'm adding it to my To Be Read list!
~Ariella Moon 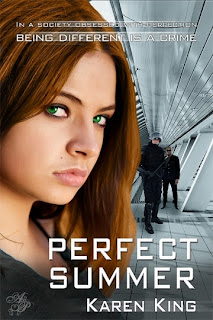 Perfect Summer
Growing up in a society so obsessed with perfection that the government gives people grants for plastic surgery, 15-year-old Morgan can't help being a bit envious of her best friend Summer. Summer is beautiful and rich, her father is a top plastic surgeon and her mother is a beauty consultant with a celebrity client list. Her life seems so effortlessly perfect. Whereas Morgan isn't so rich or beautiful and her little brother, Josh, has Down's syndrome - which, according to the Ministry and society in general, is a crime. Then Josh is kidnapped and the authorities aren't interested so Morgan and Summer decide to investigate.They, along with another teenager, Jamie, whose sister, Holly, has also been kidnapped, uncover a sinister plot involving the kidnapping of disabled children and find themselves in terrible danger. Can they find Josh and Holly before it's too late?

Prologue
They were on their fourth game of poker. The air was tense; they played in silence, speaking only when they had to.
The burly man glanced at the five cards in his hand, his expression unreadable. “I’ll see you.” He took a drag of his cigarette and waited.
The woman sitting next to him studied her hand of cards and sighed. “I’m folding.” She placed the cards face down on the table, crossed her arms and sat back in her chair.
They both watched the bald man on the other side of the table. He looked at his cards and frowned. The burly man took another drag of his cigarette and sent a spiral of thick smoke into the air. Then a shrill ring broke through the silence, making them all jump. The burly man grabbed his nanophone and the others waited as he flicked it open. The air was electric with suspense.
“Yes,” he said brusquely. He was silent as he listened, then replied, “We will leave immediately.” He switched the phone off, threw his cards down and stood up. “It’s on,” he said, scooping up the handful of coins in the middle of the table and putting them, and the phone, in his pocket.“Let’s get going.”
The woman left her cards and followed him. They both hurried outside to a dark blue van. The man climbed into the driving seat, the woman sat beside him. She took a slip of paper out of her pocket and keyed an address into the E--‐‑Nav. “We’ll be there in a couple of hours,” she said.
“How old’s this one?” the man asked.
“Three,” the woman replied.
“Shouldn’t be too difficult then.” The man started up the van and they set off.
Chapter One
“23.8!” I whooped as the score blazed on the wall for everyone to see. So far I was the top player.
“That’s great.” Summer flashed me a too-bright smile. “Let’s see how I do.”
Tucking her long blonde hair behind her ears, she pressed the silver button on the screen. A black ball rolled out of the chute. She bounced it against the wall like an expert.
Tap, tap, tap.
The two megafit lads who’d been watching nudged each other and moved a bit closer. Tall, slim, spike-gelled hair, looks to die for, the sort of lads Summer always attracted and I didn’t. But then I wasn’t effortlessly beautiful with creamy skin and diamond blue eyes like she was.
“Game commence!” the automated voice announced.
Summer caught the ball as it bounced off the wall and ran with it. A holoplayer flashed in front of her and she swerved just in time. If she touched a hologram she would lose vital points. The next holoplayer took her by surprise. She didn’t stop in time and a buzzer sounded as she ran right through him.
“Penalty!” the automated voice announced.
Summer grimaced. Two penalties and she’d be out. I knew she was desperate to beat my score. Summer liked to be the best at everything, and she usually was. But I always beat her at Xball. That made me feel good even though I didn’t actually like the game.
Summer managed to avoid running through the other holos, although she lost a few points because she skimmed a couple of them.
“18.9!” The autovoice declared. The score flashed on the screen as Summer threw the ball through the net.
Summer shrugged her shoulders at the two watching lads then raised a perfectly-arched eyebrow at them as two girls--obviously their girlfriends--joined them. I’d seen her do that before. It was her, ‘What? You’re with them when you could be with me?’ look. One of the lads flashed a rueful grin back, but Summer had already turned away.
“I’m done, Morgan,” she said. “Let’s go and get a smoothie.”
We joined the queue at the elevator. The Holozone was always busy, especially during the school holidays. “Doors opening!” the autovoice announced as the doors of the cylinder glass elevator slid open and we all stepped in. “Doors closed. Select your destination!”
“Sky Bar everyone?” a girl asked.
A chorus of yeses affirmed the question so she selected the top button and we glided upwards past the kids playing hologames, laser sports, swimming in the jet pool or simply hanging around listening to music from the E-centres. We finally came to a smooth halt at the rooftop café. It was pretty full, but we managed to find an empty table and sat down with our smoothies--strawberry for Summer and banana for me.
“Want to stop at my house for the weekend?” Summer asked. “We’re going to Roxy’s.”
Did I ever! Roxy’s, on the top floor of the River Dome, was the best club in the whole universe. It was where all the celebs hung out. Then I remembered that the club was so exclusive that anyone not considered beautiful enough was turned away.
“Do you think I’ll get in?” I asked, never doubting for a moment that Summer would.

Author blurb
Karen King has had over one hundred children’s books published. She’s written for many children's magazines too including Sindy, Barbie, Winnie the Pooh and Thomas the Tank Engine. She writes for all ages and in all genres; story books, picture books, plays, joke books and non-fiction. Perfect Summer is her first YA. It was runner up in the Red Telephone books YA Novel 2011 competition.
Links