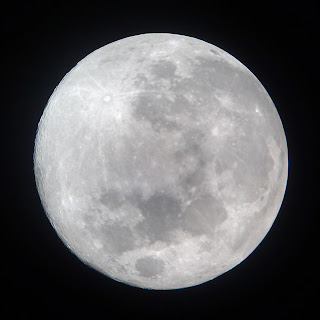 Technically A Blue Moon?
Yes. Allow me to explain:

I’ve always followed the rule that a Blue Moon is the second full moon occurring in a single month. James Hugh Pruett stated the definition in his 1946 article in Sky & Telescope, “Once in a Blue Moon.” He wrote:

"Seven times in 19 years there were — and still are — 13 full moons in a year. This gives 11 months with one full moon each and one with two. This second in a month, so I interpret it, was called Blue Moon."

Pruett had based his definition on a misinterpretation of a 1943 Sky & Telescope column penned by Lawrence J. Lafleur.  Lafleur, in turn, had quoted the 1937 Maine Farmer’s Almanac, which had defined a Blue Moon as occurring when "one of the four seasons would contain four full moons instead of the usual three." Since Lafleur hadn’t provided specific dates, Pruett misinterpreted Lafleur’s definition.
The “two full moons in one month” became nationally solidified when Deborah Byrd used it in a 1980 National Public Radio broadcast.
Source: Joe Rao, Skywatching columnist, Space.com
http://www.space.com/22404-blue-moon-science-august-full-moon.html
Folklore Beliefs About the Full Moon
According to the Old Farmer’s Almanac:
•   Clothes washed for the first time in the full Moon will not last long.
•   If you glimpse the new Moon over your right shoulder, you will have good luck.
•   To have a project prosper, start it during the new Moon.
•      Babies born a day after the full Moon enjoy success and endurance.