Don't you love reading novels set in your home town or state?

I am from the San Francisco Bay Area, and was happy to discover Amazon Best-Selling Author Cynthia Woolf, and her Brides series. I asked Cynthia what drew her to San Francisco as a setting for five of her historical novels.


Why I chose San Francisco

I love San Francisco. The city is fascinating to me. The people are hardy and determined. They rebuilt after the great fire and after numerous earthquakes.

When I am looking for locations for my mail order brides, I like places I can go to as well as research on the internet. San Francisco fit the bill nicely. And there were many women who did come to San Francisco as mail-order brides.

I like being able to read about my location. In this case San Francisco has a rich history. It was a small sea port prior to the 1849 gold rush and then it grew phenomenally fast. Miners and supplies for them came through San Francisco. There were sailors and rendering plants for whalers on the wharf.

Until the advent of the transcontinental railroad, the only way to the California goldfields from the east was by sailing ship around tip of South America and up the western side of that continent to San Francisco. If the weather was good it took around five months. Steamships that carried the mail could do it in three because they didn’t have to depend on the wind to carry them over the water.

The railroad which began regular service in late 1869, took less than two weeks to make the same journey. The railroad literally settled the west and allowed for the great expansion of this country.

Another reason to choose San Francisco is that I could read actual accounts of brides that were brave enough to go there. In the beginning not that many were willing to uproot themselves, to leave all they knew and everyone they loved, for the adventure of becoming a mail-order bride.

There is a story of a man who vowed to bring back brides for the miners, sailors and businessmen. He sailed to Boston and ran his ads for women to marry these men. He only managed to get a few women to go back with him and was mobbed when he got back with only ten or so women for the hundreds of men waiting for wives. 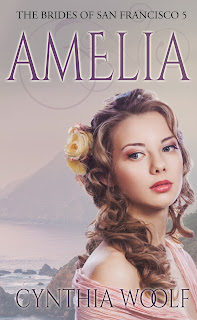 Eventually, women did come. Churches sprang up and manners were required. Children were born and schools built. San Francisco grew from a boisterous coast town to the jewel of the West Coast that we know today.
BLURB:

Amelia James grew up performing on the stage. Her stunning voice made her the darling of New York's theater district since she was fifteen. She's never been more than an asset to her mother, never been just a woman to the young up-and-coming men who want to use her to advance their own careers. Amelia loves to sing, but is willing to give up fame, fortune and her future on the stage for just one thing...love. Convinced she'll never find what she needs in New York, she makes the daring decision to leave her life behind and travel to the other side of the country as a mail order bride in San Francisco where she won't be anything more than a wife, where her future husband will look into her eyes and see her heart.

Wealthy prospector Phillip Dumont learned how to take care of himself from a very young age. With his father’s death, his mother decided to follow her dream and she abandoned her family when he was eighteen years old. Phillip raised a house full of younger siblings on his own. Now, his youngest sibling, his sister, is in need of a woman's touch. Phillip knows he'll never trust a woman enough to give her his heart, and decides a mail order bride will provide a soft touch for his sister and keep the gold-digging women at bay.

But Phillip is in for a shock. He is instantly attracted to his new wife and tempted to trust her with more than his name. No matter how vehemently Phillip demands obedience from his wife, his sister and his heart, not one will listen. When an old partner seeking revenge comes for his bride, will Phillip be able to see beyond the secrets of her past to save his family?

EXCERPT:
A knock sounded on her door.
Startled, she checked the clock on the dresser. Ten o’clock. How had the hours passed so fast? She was late. She was supposed to meet him in the lobby at nine-thirty. Shaking her head, she stood, smoothed her hands down the skirt of her pale pink dress, and checked her reflection in the mirror over the bureau before answering the door.
“Yes, may I help you?”
Her stomach fluttered. Standing on the other side of the door was one of the most handsome men she’d seen in a long time. That was saying a lot, since most of the actors she knew were quite good-looking. Philip had dark, almost black hair with a slight wave, combed so there was a small curl on his forehead. His jaw was square and strong and when he smiled, like he did now, a small dimple appeared in his left cheek.
“Miss James?”
“Yes.”
He doffed his hat. “I’m Philip Dumont.”
“Hello, Mr. Dumont. I’m so sorry I didn’t meet you downstairs as I said I would. What you must have thought.” She shook her head. “If you’ll wait just a moment, I’ll get my wrap and then we can leave.”
Amelia turned, let out a breath and grabbed her paisley shawl. She stepped out into the hall, turned and locked her door, putting the key in her reticule.
“Shall we go?”
Philip held out his elbow to escort her.
Amelia put her hand around the crook in his arm and they proceeded down the hall.
“Yes. We shall. I have a request to make.”
“Certainly. What is it?”
“My friend Sophia Hayes, who came here with me as a mail-order bride, is getting married today. They are of one accord and saw no point in waiting. She asked me to stand up with her, and I accepted. We’ll need to be at their house at 1309 Grant Avenue by twelve-thirty.”
“That can be arranged. I thought I’d take you for an early lunch at my home. You can meet my sister and we can get to know each other a bit.”
Amelia beamed.
They stopped beside the carriage and he helped her up into the vehicle before following her inside. As was proper, they sat across from each other.
Glad he agreed, their acquaintance can move forward. “Why don’t you tell me about your sister? How old is the child?”
“She’s seventeen.”
Amelia’s eyes widened. “Seventeen! That’s not a child. She’s a woman.”
“She’s a girl. Still in the school room.” Frowning he crossed his arms over his chest and looked out the window.
Amelia understood now. “Mr. Dumont, Philip, if I may and please call me Amelia.”
“Certainly, Philip is fine. We are after all getting married soon.”
Cautiously she spoke. “Yes, Philip. Your sister is a young woman. Is it possible you don’t want to see her as an adult, not yet anyway, and she is rebelling against the constraints you put upon her.”
He leaned forward, anger in his eyes. “You’ve never met her and barely met me, how can you make such an assumption?”
Oh dear, she probably should have kept her mouth shut, but she’d never been one to hold back her opinions. “Perhaps I’m wrong, but based on your letter I thought your sister was a child. She is clearly not.”
“You’ll meet her and then you can tell me if I’m wrong. Regardless of how I treat her, she needs a woman to guide her.”
Amelia bit her rogue tongue. “You’re correct. I shouldn’t be saying anything without facts. I apologize.”
“Apology accepted,” he said grudgingly.
“Why did you send for a mail-order bride? Surely with your wealth, you could have any woman you want.”
“Most of the women I know are not suitable wife material and those that are didn’t want to take on the raising of a child of any age.” He lowered his head and stared at her intently. “I want children, Amelia. I won’t beat around the bush. But don’t expect me to fall in love with you. I don’t believe that the emotion exists between adults.”
“Nor do I, Philip. That’s the reason I became a mail-order bride. I couldn’t find a gentleman who suited, who also wanted children.” No one who suited me. I refused to be a mistress and the men I knew and those I met, didn’t want a wife.
“Then it would appear that we shall get on together. We both want the same thing.”
“Yes, we do. Children.”

Cynthia Woolf is the award winning and best-selling author of twenty-two historical western romance books and two short stories with more books on the way.

Cynthia loves writing and reading romance. Her first western romance Tame A Wild Heart, was inspired by the story her mother told her of meeting Cynthia’s father on a ranch in Creede, Colorado. Although Tame A Wild Heart takes place in Creede that is the only similarity between the stories. Her father was a cowboy not a bounty hunter and her mother was a nursemaid (called a nanny now) not the ranch owner. The ranch they met on is still there as part of the open space in Mineral County in southwestern Colorado.

Writing as CA Woolf she has six scifi, space opera romance titles. She calls them westerns in space.

Cynthia credits her wonderfully supportive husband Jim and her great critique partners for saving her sanity and allowing her to explore her creativity.