Spotlight on Suspense with L.K. Kuhl

Warning: Kuhl gives Chasm a PG-13 rating for some fighting and gore. 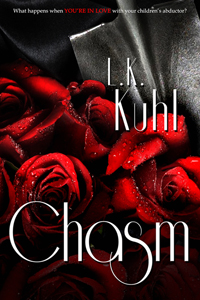 What happens when you’re in love with your children’s abductor?

Blurb:
Taylor Vine thinks she can fight off the demons of her past when she moves back home to Estill Springs, Tennessee, but it doesn’t take long to see that things aren’t quite that easy. The bumps she hears in the night soon escalate, keeping her up at nights, and it isn’t long before her most precious possessions, her children, get abducted. She finds herself in a race against time to try to find them before it’s too late. One wrong move and the outcome could be disastrous.

Excerpt:
Her heart picked up its pace, and she reached for the phone. She hesitated, unsure whether to even answer it. But she plucked it from its receiver. “Hello?” Her voice slid out rickety and unsure.
The male voice on the other end was dark and deeply plagued with distress. It broke, and she struggled to make out what he was saying.
What she heard next was unimaginable; it didn’t sound human. The grief penetrated through the voice—through the phone—flanking it with wretched wails and sobs. “I’ve killed the children. Heaven…help me…I’ve killed the children.” The phone went silent.
Taylor’s knees buckled. “What?” The hyper pitch in her voice strained out. “Goodness gracious, who is this? What happened? Whose children?” Her knees about took her down again. She caught the edge of the counter, catching herself before she fell. “Answer me, for crying out loud! Don’t hang up on me!”
She listened desperately, plastering the phone to her ear. But the phone was silent. “Hello, hello? Answer me!” Frantically clicking the telephone cradle button, she tried to bring him back, but there was only a dial tone.
She pounded the phone on the counter so forcefully that the plastic mouthpiece broke into a million tiny pieces. She let it fall, left it dangling by its cord. Swiftly making her way to the hall closet, she rummaged through the plastic totes for a flashlight. “There has to be one in here somewhere,” she mumbled to herself. Extension cords and old Christmas lights spilled over onto the floor.
Finally finding a flashlight, she clicked it on. It was dim, but it would do. She ran back to the hall, to the children’s rooms, feeling no pain in her swollen ankle.
Flinging Cody’s door wide, she flashed the light toward the wall where his bed sat. In slow motion, the lonely, empty, disheveled bed yanked a horrifying scream from her gut, reverberating through the house. The earth quit spinning, and she was lost to oblivion. “NO! Not my children! Please, God…not my children.” She needed life support, couldn’t breathe; the air was being sucked from her body in rapid swells. She dropped to the floor, her world going black—closing in—smothering.
Not knowing how long she’d been out, Taylor struggled to her feet, she was sure it wasn’t long; it was still black outside, flashes of lightning still cracking in through the window. She raced to check on Nora. Her room was the same: deserted, hollow, puncturing a bleeding, oozing hole in Taylor’s chest the size of a large, bottomless chasm.
“For crying out loud, no…please, no.” The tears coursed down her face. She staggered numbly to Nora’s empty bed, collapsing on it, her hand reaching, groping—trying to find the warmth of her baby girl. But the only thing the tangled blankets and sheets offered her was a bleak and disgusting coldness. It shocked her through her hand. How long had they been gone? Time couldn’t wait, she needed to find them.

Author Bio:
L.K. Kuhl lives in Nebraska with her husband of twenty-nine years, young son, Nathan, and Greg and Will, their furry dog kids. She has two older daughters, Morgan and Brittani and son-in-law, Trevor. L.K. has been writing for over twenty years. She first began writing children’s books and poetry, moved on to writing music, and is now writing Young Adult and Adult novels. Her first book, Everlasting, a Young Adult Paranormal Romance, was published in February, 2016. She loves spending time with her family, vacationing, writing, reading, and taking long walks. It’s the characters who write their own stories in her novels, and she is just their messenger, sharing it with the world.

I got the idea to write Chasm because my husband used to be an engineer for the railroad. Although my husband never worked with this gentleman directly, one of the engineers on the railroad hit and killed his wife and children with the train he was driving. It was no fault of the engineer. The wife did it deliberately to get back at her husband, the engineer. The engineer said the last thing he saw was his children looking up at him from the windows of the car.
Although this is a work of fiction, and this is just a story between two, make believe people, I felt compelled to tell his story about how utterly and completely devastating this would be. The engineer was never able to return to work after this.
Author Links:
Website: https://kuhlreads.com/
Author Facebook Page: https://www.facebook.com/kuhlreads
Twitter: https://twitter.com/lynettehoff1
Pinterest: https://www.pinterest.com/lynettehofferbe/
Instagram: https://www.instagram.com/l.k.kuhl/
Blogger: http://kuhlreads.blogspot.com/
Goodreads: https://www.goodreads.com/book/show/28674602-everlasting
Amazon Author Page: http://www.amazon.com/-/e/B01BXDJGIY