Meddlesome Matchmaker. Isn't that a great name for a romance series? 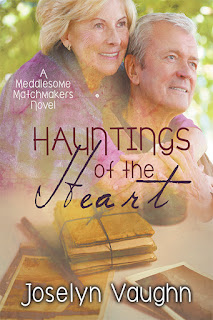 Hauntings of the Heart
A Meddlesome Matchmaker Novel

When lost love shows up on your doorstep, what do you do?  Minnie Schultz slams the door in his face. She and Gordon Anderson have a history—close to ancient history, given the fifty years since their last encounter. After all that time, it might seem like water under the bridge. But the water pours from the plumbing in Minnie’s bed and breakfast, the Lilac Bower, uncovering all the secrets and heartache between them. With the help of some paranormal investigators, an Elvis impersonator and a couple of nosey friends, can Minnie and Gordon find the future they were meant to have?

Other books in the Meddlesome Matchmakers series: Climbing Heartbreak Hill and Sucker for a Hot Rod 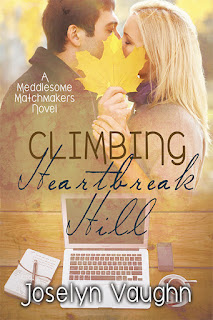 Professional runner, Ryan Grant, blows out his knee training for another attempt at the Boston marathon and the dreaded Heartbreak Hill. Ryan retreats home, not looking for anything more than a fast recovery, but he finds solace in the arms of his tax preparer, Tara Mansfield.
Tara’s cheerleading career ended abruptly and she faces an upward climb beating the stereotype as dumb blonde in her new calling as an accountant. Framed with defrauding the IRS during the last weeks of the tax season, Tara’s tentative confidence is shaken, but Ryan coaches her in ensnaring the true perpetrator. She cheers him on in discovering his identity as a coach rather than an athlete.
With the help of the junkyard king and a mechanical bull, can Tara and Ryan find the courage to climb Heartbreak Hill together?

Other books in the Meddlesome Matchmakers series:
Hauntings of the Heart and Sucker for a Hot Rod