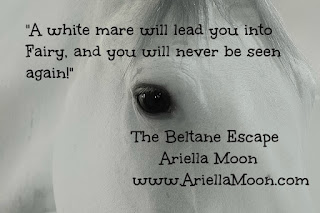 Isn't it odd that magical horses and horse-like creatures are usually white, yet pure white horses in real life are rare?

Unicorns and winged horses are the color of stars and moonlight. So, too, are fairy horses. According to Celtic lore, a white horse will lead you straight to Fairy. Once in Fairy, you might spot small white fairy horses. One of my favorite authors, Herbie Brennan (The Faerie Wars series), saw such a sight. In "Do Fairy Horses Exist?", Brennan recalls his encounter with fairy horses at the megalith Longstone Rath in County Kildare, Ireland.

In addition to Fairy horses, England is rich in massive chalk horses. One of the more mysterious chalk horses is the oldest, the Iron Age Uffington White Horse (374 feet long). Was it a tribal symbol? Not knowing, adds to it magic.

In the mundane world, “true white” horses are rare. Many horses that appear white are actually gray, and unlike true white horses, they have black skin, not unpigmented pink skin. (Look at the skin around the horse’s eyes.)

One of the most magical sights I have ever witnessed was the sudden appearance of two riderless pure white horses standing in the surf near Caernarfon Castle in northwestern Wales. They stole my breath with their wild beauty. Enchanted, I desperately wanted to turn back for one more glimpse. I was traveling on a small tour bus at the time, and no one else spotted them. So perhaps the Welsh steeds, like the Lady of the Lake’s white mare in my upcoming book, The Beltane Escape, Book One: The Two Realms Trilogy, were not of this world.

I am pretty sure they would have led me straight to Fairy.

Look for The Beltane Escape, Book One: The Two Realms Trilogy, in February, 2016.