Do you love ballet? Sweet romance? Me, too.
That's why one of the characters in the Teen Wytche Saga is a former ballerina.

The Dance of the Firefly
Kathy Bosman

Mix together a beautiful ballerina and ballet teacher, a sexy single dad, and a precocious-yet-sweet daughter, and emotions run high. Add racial and cultural differences, work contracts coming to an end, and hurts and memories from the past and sparks fly.

Rowena loves to dance but has ended up teaching ballet instead. When she helps out Cameron’s difficult daughter, a bond develops between the two dancers. Cameron makes Rowena uncomfortable because he stirs up new, unwanted feelings which make no sense when he intends to leave Zambia soon when his contract ends.

Cameron can’t resist sanguine live-wire Rowena who makes his daughter smile for the first time in years. But can he risk his heart again when memories of his late wife come back to haunt him? And Rowena has a lot more at stake in giving her all. 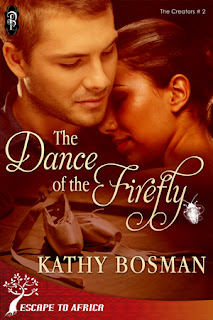 Cameron slipped out the door before Rowena spotted him watching her. His heart rate betrayed his surprise. He’d never seen anything so beautiful. Samantha used to dance beautifully, but not with so much feeling. His late wife’s ballet had been a perfect craft. Each step melded into the next neatly and graciously, without anything out of line. He felt like he could almost see the imaginary lines on the stage when she danced. The perfect spaces she kept on.

Not this woman. Her dancing was rough, raw, and deep. In those few moments of watching Rowena through the high studio window from the dark outside, his whole soul had been shaken to the core. It was as if she’d touched something deep inside of him.

Since Samantha died, the only human being who mattered was Jamey. Few people understood what it was like to lose a spouse after six years of marriage and eight years together. It was like losing a leg or an arm. Everything you did was crippled. Every moment of every day, you remembered your loss and felt less capable of achieving your goals.

So how could he be so fascinated with another woman? He climbed into his Land Rover and took a potholed road to Kalundu to pick up Jamey. The familiar jarring of the huge gashes in the tar forced him to drive slowly. In some places, the surface of the road consisted of more dirt than tar. Boredom lulled him into a dream world.

Flashes of the teacher’s dance came back to him. Why couldn’t he stop thinking of it? Why did he suddenly long to take the woman in his arms and kiss her thoroughly? Her pertinence had attracted him. The raw energy she displayed had drawn him. The young woman’s unusual appearance had fascinated him. He’d been mesmerized by her fake blonde streaks against dark, straightened locks pulled into a tight ponytail, clear green eyes, and caramel skin. The unusual coloring and bone structure, with her high cheekbones and pointy chin, were softened by the smoothest-looking skin he’d even seen and rounded cheeks.

Saturday was going to be interesting. Not like he would pursue anything. He wasn’t ready for a romantic relationship. But browsing was free. Experiencing a person from a distance should be safe. Pity he couldn’t spy on the class. He had the means to, but would his conscience let him? A small smile tugged at his mouth. He could watch her before and after the lesson. In his mind’s eye, Samantha peered at him from the stage, her body poised in an elevated step, questioning him with her gaze, her gentle smile warming his heart. Yeah, it wasn’t time yet. Would his memories ever let him think of anyone other than his late wife?

After supper, Jamey pulled Rowena down the passage.

“Wow,” she said. “What a pretty room.” She wasn’t just saying it. Cameron had put everything into his daughter’s space: Disney Princess curtains and matching duvet set, with fluffy soft toys displayed on floating shelves shaped as crowns. In the corner sat a four-poster, with a pink net cascading down the sides, a requirement in Zambia to keep malaria mosquitoes away at night. The nets were inconvenient, but Cameron had used hers to add a dreamy effect.

“My daddy asked a lady to make it girly.”

“Look at my Barbie dolls. I have three ballerina ones. This one….” Her voice went quiet, almost reverent. “My mommy bought me this one a few months before she died. Her legs and arms bend, and she has a second pair of ballet shoes. Some black ones.”

“I did my first principal role with black ballet shoes. I was the bad witch in a show we danced in.”

Jamey stared at her. “Why did you want to be the witch?”

She suppressed a laugh. “I didn’t want to be a bad person, but the role was the hardest, and I considered it a privilege to be chosen.”

“Did you get a curtain call?”

“We all did. My teacher did a great job in writing the story and choreographing the ballet steps for us. The dance was so popular, we even did it in front of the president of Zambia.”

“Wow. My mommy used to dance in front of thousands of people. She was very popular.”

“What was her name?”

“She used her old name for her ballet name. Samantha Palmer.”

“Oh.” Rowena swallowed a lump in her throat. Samantha Palmer had been a well-known prima ballerina who danced for the South African Ballet Theatre, now called the South African Msanzi Ballet Company. She should know. She’d tried to get in there, with no success. Samantha had been one of her idols. The most graceful, delicate dancer she’d ever watched. Her role in Romeo and Juliet had been the highlight of her career, giving her international recognition. That had been five years ago. How long ago had she died? How had she died?

“Your mommy was a very talented dancer. You must have inherited some of her talent.”

Her breath hitched. The girl had a difficult act to follow.

“You don’t have to dance like her. You must dance your own way. Everyone has his or her own style. You need to work on your strengths and concentrate on what you can do.”

Jamey nodded. “But Daddy misses watching Mommy. I’ve seen him play her ballets on the DVD player all through the night. If I could dance like her, maybe Daddy would be happy again.”

She suppressed a gasp. No wonder the kid had hated her ballet lessons. The pressure had been enormous on her.

“Your daddy is happy with you being a child and having fun. You don’t have to be too serious with your ballet, yet. It takes years to learn how to dance like your mother did.”

She nodded, her lips quivering.

“Your mommy would have wanted you to enjoy ballet. She wouldn’t want it to be something hard and too serious.”

“And it’s not your mommy’s ballet Daddy misses,” she said, taking Jamey into her arms and giving her a tight squeeze. “It’s her company at home. He watches her so he can remember her as a person.”

Jamey’s face was wet with tears.

“I’m sorry your mommy died.” Rowena wiped a tear away with her hand. “My mommy died a few days ago. I miss her so much.” She swallowed the lump in her throat. “I can imagine how you must miss her, being a kid.”

“But your daddy loves you whole bunches. He cares for you deeply.”

Jamey jumped off her lap and grabbed a puzzle. “This is my favorite. It’s of a hedgehog and a mole.”

“It’s cute.” Rowena was relieved to get away from the difficult subject of her deceased mother. She couldn’t bear to see how much it hurt Jamey not to have her mother with her. As much as she hated being without her mom, at least she’d had her growing up.

“We can make the jigsaw on the table in the lounge while the others watch rugby. I can hear them all cheering in there.” She lowered her voice to a whisper. “Don’t tell anyone, but I hate rugby.”

She linked pinky fingers with Jamey. “Perfect. Then we can build the picture together and pretend to watch. Okay?”

The child nodded, the box gripped in her arms, her eyes shining. The smile came back, and Rowena let out a breath she hadn’t known she’d been holding. How could she become so attached to a kid so quickly? Something weird had happened. From worst student to tiny friend, a miracle had occurred. How could she push her new little friend away because her father made her feel uncomfortable—and too aware of her womanhood? 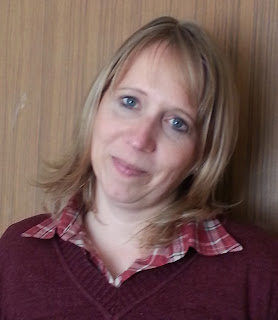 Kathy loves reading and writing even more. She homeschools her three kids, so in between unsuccessfully explaining the difference between subject and predicate or how to divide fractions, she enters an imaginary world of troubled and passionate characters whose stories take over the page. Kathy lives in Kwazulu Natal, South Africa, where the summers are hot, the winters cool, and bugs thrive. Her first published novel, Wedding Gown Girl, came out in 2012 with Astraea Press. She belongs to the Romance Writers of South Africa Group (ROSA) which has been her greatest support and inspiration the last few years.

Authorgraph: https://www.authorgraph.com/authors/KathleenLBosman
Posted by Ariella Moon at 6:30 AM