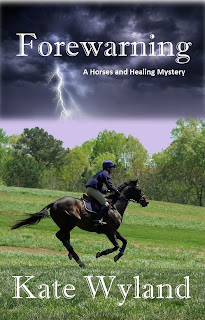 Today's spotlight is on writer and equestrian fan, Kate Wyland.

Healing is her life. Will it be her death?

Grieving and guilt-stricken after her husband’s suicide, Kasey Martin has closed her energetic healing practice and retreated to her Oregon horse ranch. One night, she rescues a badly injured man, and against her better judgment, uses her neglected skills to save his life. This starts her on an unexpected journey of healing and danger.

Complicating her life is Jim Bradley, an old friend who has long been in love with her and wants her to return to her work. When criminals looking for her patient invade the serenity of her world, she must use her skills to save all three of their lives.

Kasey Martin found a badly injured man, used her energetic healing skills to help him and got him to the hospital her late husband practiced at. Now she is waiting to hear the results of the surgery.

Bleary-eyed, Kasey focused on the approaching figure in green scrubs and her heart leapt. Brian! Reality intruded and she realized it was Jim. Then the rest of the night came back to her.

A slow smile creased Jim’s craggy face as he nodded and answered. “We’re pumping blood and fluids into him, as you would expect. His hand sustained second- and third-degree burns. To my surprise, I didn’t have to remove his spleen.” He scrubbed his hands through his sandy hair, fluffing up the damp strands.

Folding his tall, lean form, he sat on the chair next to her and put his hands on her upper arms to turn her slightly away from him. She tensed when he began massaging her shoulders, then gradually relaxed, giving into the comfort of his touch. Closing her eyes, she let her head drop as he rubbed small circles up and down her neck.

He continued in his slow, folksy drawl. “The assisting surgeon is sorta’ puzzled, though. He can’t figure out how that amount of blood came out of the small seeping wound we found. You did a good job, Rusty. I saw where a larger part had already started to heal.”

A wave of relief swept over her and the tightness in her chest released. “I’ve never tried anything like that before.”

Jim’s voice quickened with excitement and he gave her a harder squeeze. “Damn, that was fascinating. I’ve seen the results of your work from the outside for years. This is the first time I’ve seen it from the inside.”

Kasey twisted her head around. “You didn’t say anything, did you?”

“No, no, the Assisting works for Frank. I didn’t want to start something. He’ll find out about you soon enough.”

The thought of Frank Edwards, her former father-in-law, sent her blood pressure skyrocketing. Kasey wagged her head back and forth. “No. Tonight was an emergency. I can’t do my Integrative Therapy anymore. I don’t know how I managed to do anything at all.”

“But you did, and the guy probably owes you his life. You should feel damn good.”
Actually, she felt scared and exhausted. She’d taken a chance tonight. Against her better judgment, she’d used her abilities for the first time in over a year. And it appeared to have worked out—for the moment. She knew she would pay for her actions. The fatigue that was draining her now was only the beginning.

Engrossed in his own thoughts, Jim continued. “I’ve sent our mystery man up for an MRI, and I’m pretty sure they’ll find brain swelling. Seems he suffered two cranial injuries. The one on the front of his head is typical of a car accident. The other is on the side toward the back and looks like he was hit from above or something fell on him. Apparently happened a while earlier.”

He paused, while still kneading her neck and shoulders, then spoke rapidly. “Given his condition, I don’t want to pump any more drugs into him than I can help. I’d like you to work on him when he comes back.”

Jim, like many younger physicians, often looked to alternative methods to heal his patients. Still, Kasey twisted and stared at him in disbelief, then shook her head.

“I know you’re scared and hiding out, but you obviously didn’t quit tonight. You need to finish the job.”

“And what about Frank? What would he say to my ‘finishing the job’ in his hospital?”

“He couldn’t say anything. You’d be working under my orders.” Jim leaned toward her. “Think about it.”

“All I want to think about is going home and getting some sleep.” Now that the worry was gone and she’d begun to relax, she was having trouble keeping her eyes open and her body upright in the chair. She hoped she’d be able to make it back to the ranch.

With a defeated sigh, Jim changed the subject. “Take a minute and tell me about tonight. Where did you find our patient?”

Kasey accepted the switch in topic with relief. She’d already told her story—with certain parts left out—to the Sheriff’s officer who had escorted her to the hospital. She’d learned from him they’d found no identification on the man, so they couldn’t notify anyone. They’d have to wait until he regained consciousness.

After she finished telling Jim about her rescue efforts, he nodded. “Tell Star for me she ‘done good’ when she woke you up … and so did you.”

He rose and extended his arms above his head. Glancing down at her, he paused in mid-stretch. He jerked forward and took her face in his hands.

“Jeeze, Kasey, what’s going on? You look like you’re ready to pass out.” One hand went to her wrist as he felt her pulse.

She gave him a groggy smile. “Just tired. Think I’ll take a nap before I head home.”

“You’re not going anywhere.” He scooped her into his arms and started down the hall past a deserted nurse’s station. “I’m putting you to bed. We have a few empty rooms at the end of this hallway where we’ve been remodeling. It’s far enough away from any patients that you shouldn’t be bothered by their energy.”

Kasey pushed against his chest. “Don’t be silly. Put me down. I’ll be all right in a few minutes and then I’ll head back home. The animals will want their breakfast in the morning.”

Jim frowned down at her. “No way. You can’t drive in that downpour. You’ll end up in here alongside your patient.”

From over his shoulder, Kasey could see the rain coming almost horizontally at the glass doors of the emergency room. She had to admit she didn’t look forward to another hour’s drive in that. With a sleepy shrug, she slumped against Jim’s shoulder. After so long alone, it felt good to be held and taken care of. 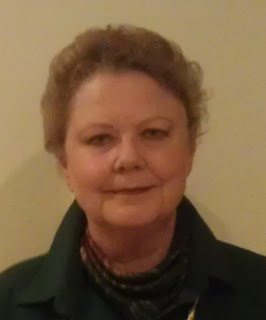 Kate Wyland is a life-long horse nut who started riding at three years old. She’s taken part in a great variety of equestrian activities with her greatest loves being dressage and trail riding in the mountains. A few years ago, she exchanged her tech writing “bug” hat for a fiction writing Stetson. Suspense, romance, horses and sometimes the paranormal are the themes she likes to explore in her books. And she delights in sharing her love of animals and country living.