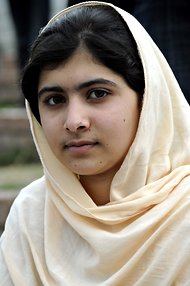 Fourteen-year-old Malala Yousafzai had good reason to be afraid. The Taliban in Pakistan considered her a threat because she dared defy them by publicly championing education for girls. Masked Taliban gunman targeted Malala on October 9. She sustained grave head, neck, and shoulder injuries, and two other schoolgirls were wounded. All three survived. Malala was flown to Britain for life-saving medical care. The New York Times and other news sources reported that the Taliban have vowed to try to kill her again.

According to Declan Walsh, who posted his own article and contributed from Islamabad to the NY Times article, a Taliban spokesman called Malala's "crusade for education rights an 'obscenity'."

Walsh's statement said it all:


"That Ms. Yousafzai’s voice could be deemed a threat to the Taliban — that they could see a schoolgirl’s death as desirable and justifiable — was seen as evidence of both the militants’ brutality and her courage."
Such bravery deserves our support. I am a strong believer in the power of collective prayer, intention, and healing energy. Take a moment to send healing and protective thoughts to Malala Yousafzai. Light a candle for her and add light to this teen beacon of courage.
~Ariella